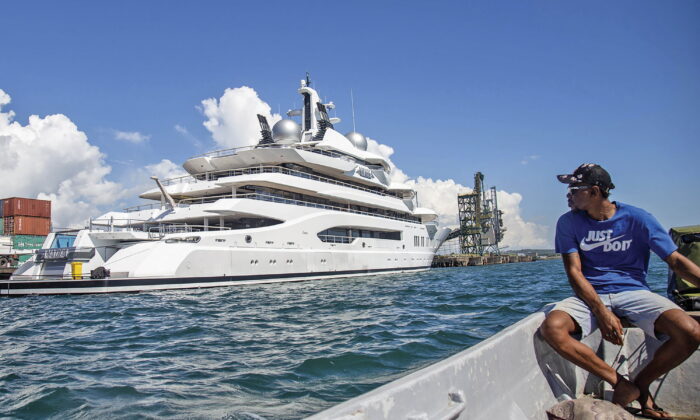 Boat captain Emosi Dawai looks at the superyacht Amadea where it is docked at the Queens Wharf in Lautoka, Fiji, on April 13, 2022. (Leon Lord/Fiji Sun via AP)
Southern California

Russian Superyacht Seized by US Arrives in San Diego Bay

The 348-foot-long Amadea flew an American flag as it sailed past the retired aircraft carrier USS Midway and under the Coronado Bridge.

“After a transpacific journey of over 5,000 miles (8,047 kilometers), the Amadea has safely docked in a port within the United States, and will remain in the custody of the U.S. government, pending its anticipated forfeiture and sale,” the Department of Justice said in a statement.

The FBI linked the Amadea to the Russian oligarch Suleiman Kerimov, and the vessel became a target of Task Force KleptoCapture, launched in March to seize the assets of Russian oligarchs to put pressure on Russia to end the war in Ukraine.

The United States won a legal battle in Fiji to take the Cayman Islands-flagged superyacht earlier this month. The Amadea made a stop in Honolulu Harbor en route to the U.S. mainland.

“The successful seizure and transport of Amadea would not have been possible without extraordinary cooperation from our foreign partners in the global effort to enforce U.S. sanctions imposed in response to Russia’s unprovoked and unjustified war in Ukraine,” the Justice Department said.