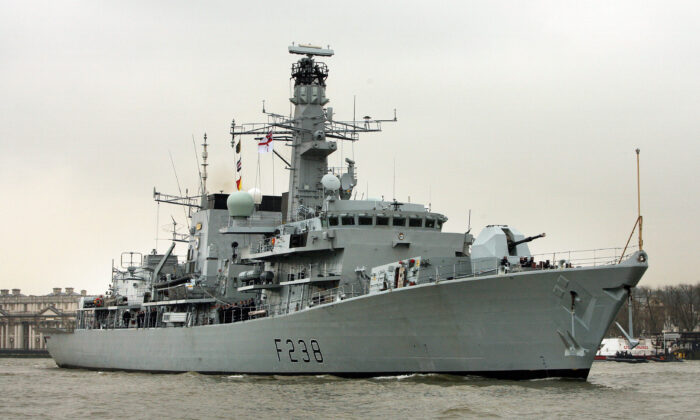 A British Royal Navy warship collided with a Russian submarine while on patrol in the North Atlantic Ocean in late 2020, it has been revealed.

The collision took place when HMS Northumberland, a Type 23 frigate, was searching for the submarine after it disappeared from the ship’s view in the Arctic Circle.

The submarine hit and damaged the warship’s sonar—a piece of equipment being towed hundreds of metres behind it, which was fitted with sensitive hydrophones for listening underwater. As a result, the warship had to return to a port in Scotland to get the sonar replaced.

The incident was captured by a documentary crew from Britain’s Channel 5 television network, who were filming a series called Warship: Life At Sea.

The Ministry of Defence (MoD), which does not usually comment on operations, has confirmed the incident because it was caught on camera.

A spokesman for the MoD said: “In late 2020 a Russian submarine being tracked by HMS Northumberland came into contact with her towed array sonar.”

“The Royal Navy regularly tracks foreign ships and submarines in order to ensure the defence of the United Kingdom,” he added.

Stand-offs between the Russian military and Western forces are not uncommon.

In June 2021, Royal Navy destroyer HMS Defender, which was part of the UK’s carrier strike group led by the aircraft carrier HMS Queen Elizabeth, was involved in an incident involving the Russian navy after it sailed close to Crimea.

The Kremlin claimed warning shots were fired by Russian vessels at the ship as it passed through the contested part of the Black Sea last week—an assertion dismissed by the UK government, which said only that a routine “gunnery exercise” took place.

Eyewitness accounts revealed that Defender was buzzed by Russian military jets and the sound of naval gunfire could be heard as it sailed from Odessa in Ukraine to Georgia.

Addressing the House of Commons on Jan. 6, Foreign Secretary Liz Truss warned that Russia has “no justification whatsoever” for its aggression towards Ukraine.

She said Russian President Vladimir Putin has been “peddling” the “false narrative” of a security threat in the region to which the Kremlin is responding.

She insisted any Russian military incursion into Ukraine would be a “massive strategic mistake” and would “come at a severe cost,” including the prospect of “co-ordinated sanctions.”

The UK is helping Ukraine “strengthen its defences with joint exercises, maritime support, and by training over 20,000 members of its army, with more to come,” Truss said.

She also urged Europe to reduce its dependence on Russian gas, adding that Britain remains opposed to Nord Stream 2, a new pipeline running from Russia to Europe across the Baltic Sea.

PA Media and The Associated Press contributed to this report.