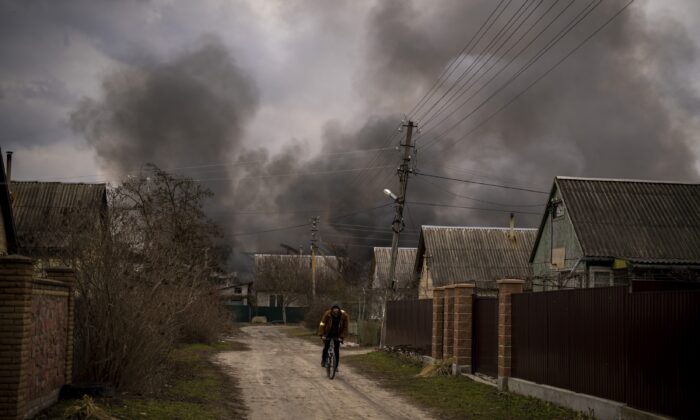 A Ukrainian man rides his bicycle near a factory and a store burning after it was bombarded in Irpin, on the outskirts of Kyiv, Ukraine, on March 6, 2022. (Emilio Morenatti/AP Photo)
Russia-Ukraine War

Russian airstrikes intensified on Friday in western Ukraine as satellite footage suggested Moscow’s forces outside Kyiv have regrouped after remaining more than a week outside the city.

The strikes also targeted an airport near Ivano-Frankiivsk, where residents were ordered to shelters after an air raid alert, Mayor Ruslan Martsinkiv said on social media.

“Explosions were heard in Frankivsk. The military and the State Emergency Service are working. Details will be released later! React to sirens,” he wrote Friday.

Russia’s Ministry of Defense confirmed to local media that its strikes hit both Lutsk’s airfield and an airfield in Ivano-Frankiivsk. Both are located in western Ukraine, which has remained relatively unscathed since the start of the Feb. 24 conflict started.

“On the morning of March 11, long-range high-precision weapons struck the military infrastructure of Ukraine. Military airfields in Lutsk and Ivano-Frankivsk have been shut down,” Russian Defense Ministry spokesman Igor Konashenkov said, according to Ukrinform.

It comes as the reported 40-mile-long Russian military convoy outside Kyiv appeared to regroup, according to satellite footage posted by Maxar Technologies. Armored units were seen in towns near the Antonov Airport north of the city. Some vehicles moved into forests, Maxar reported, with towed howitzers nearby in position to open fire, the company told AP.

Former heavyweight boxing champion Vladimir Klitschko, a member of Ukraine’s territorial defense forces and also the brother of Kyiv’s mayor, told CNN that Russian forces have been attacking areas across Ukraine on Friday. But their main target, he said, is Kyiv.

“In the next upcoming days, we’re expecting significant attack on the capital. They are regrouping. They’re trying to find different strategies and trying to find the right way and the right timing. So every hour counts, and then we’re expecting an attack on the capital at any moment, especially, as I said, the next coming days. Their target is the capital,” Klitschko said. He did not elaborate on why he believes that.

Ukraine’s military has a “lot of … military equipment, we’ll do anything possible, we’re trying to outsmart the Russian army as much as we can,” he told the news outlet.

Ukrainian President Volodymyr Zelensky said that Ukrainian forces had “reached a strategic turning point,” speaking in a video outside the presidential administration in Kyiv.

“It’s impossible to say how many days we will still need to free our land, but it is possible to say that we will do it because … we have reached a strategic turning point,” he said, without elaborating on what that may be.