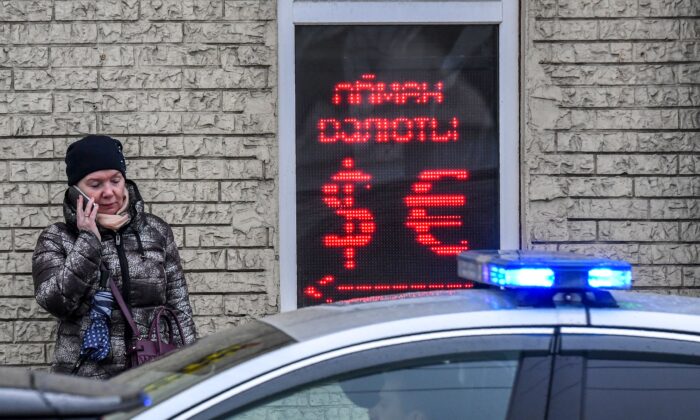 A woman speaks on a smartphone outside a currency exchange office in Moscow, Russia, on March 10, 2020. (Yuri Kadobnov/AFP/Getty Images)
Markets

Russian stocks tumbled on Monday and the country’s currency sank against the dollar to its lowest level in 14 months as mounting tensions over a possible Russian invasion of Ukraine sparked investor fears of sanctions against Moscow.

The risk-off sentiment initially pushed the MOEX Russia Index down over 7 percent intraday on Monday, with a relief rally clawing back some initial losses. By 9:12 a.m. New York time, the MOEX was down around 5 percent at 3233.85.

The Russian rouble dove over 2 percent against the U.S. dollar on Jan. 24 and by 8:55 a.m. New York time was trading at around 78.83 versus the greenback, its lowest level since November 2020.

In a bid to curb the slide of the rouble and reduce financial market volatility, Russia’s central bank on Monday ordered a temporary halt of its foreign currency purchases, the regulator said in a statement.

Volatility has roiled Russian markets in recent weeks amid fears Moscow intends to invade neighboring Ukraine. While the Kremlin has denied any such plans, Western leaders have grown increasingly anxious over a Russian troop buildup near the border.

Amid the growing tensions, The United States said Sunday it was ordering family members of U.S. diplomats to leave Ukraine, while authorizing a voluntary departure of non-essential civil servants. The U.S. Embassy in Kyiv said in a social media post that the decision was “due to continued Russian efforts to destabilize the country and undermine the security of Ukrainian citizens and others visiting or residing in Ukraine.”

Britain’s Foreign, Commonwealth, and Development Office (FCDO) confirmed on Monday it had already started withdrawing some of its embassy staff and dependents from Kyiv, citing a “growing threat from Russia.”

British authorities said Saturday that they had information the Kremlin plans to oust the Ukraine government and replace it with a pro-Moscow regime.

UK Foreign Secretary Liz Truss said in a statement that the information “shines a light on the extent of Russian activity designed to subvert Ukraine, and is an insight into Kremlin thinking.”

Truss urged Russia to “deescalate, end its campaigns of aggression and disinformation, and pursue a path of diplomacy,” and reiterated Britain’s view that “any Russian military incursion into Ukraine would be a massive strategic mistake with severe costs.”

The Kremlin has denied Britain’s claim and accused Western powers of stoking tensions in the region.

Kremlin spokesperson Dmitry Peskov blamed the Russian market rout on Western hysteria, telling reporters that, “the sooner our opponents stop their hysterical actions, the quicker this pessimistic mood will disappear.”