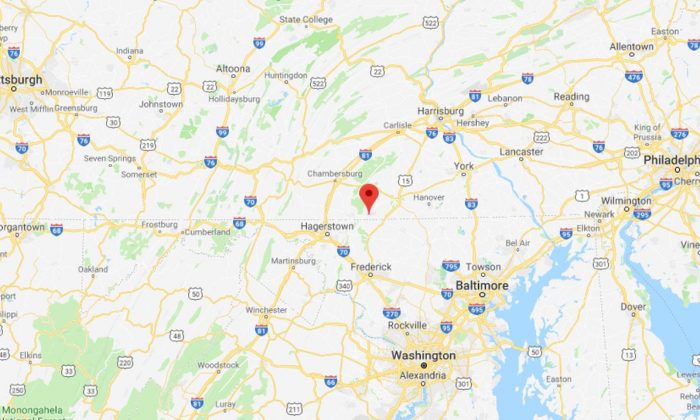 Last week, when a Russian state broadcaster listed an alleged nuclear target list that showed sites in the United States, there were questions about why it listed defunct or out-of-use military bases.

The map of potential targets included Camp David and the Pentagon, but it also included a Navy communications facility that is staffed by only 21 people, Fox News reported.

According to Reuters, which called the reports “unusual even by the sometimes bellicose standards of Russian state TV,” it was broadcast on Sunday, Feb. 24.

Maryland’s Fort Ritchie was also included, and Fox noted that it is located near the Raven Rock Mountain Complex, which is believed where the U.S. government would set up military operations in the case of a nuclear disaster.

California’s McClellan Air Force Base, which shut down in 2001, was also included in the Russian state TV report.

The map was shown when Dmitry Kiselyov, a presenter of Russia’s main weekly TV news show “Vesti Nedeli,” or “News of the Week” put up a map of the United States and identified the targets. “For now, we’re not threatening anyone, but if such a deployment takes place, our response will be instant,” Kiselyov said.

Fort Richie was closed down in 1998 and was used to train troops during World War II.

“Everyone knows the mountain is there,” Robert Stanley, the mayor of Fairfield, Pennsylvania. That’s the town located near the classified military base.

He added, “Most people have no idea what’s inside,” according to Fox.

Raven Rock Mountain Complex is also known as “Site R” and was built during the start of the Cold War. It was called “Harry’s Hole,” which is in reference to former President Harry S. Truman, who set up the facility.

Raven Rock is located in Pennsylvania near the Pennsylvania-Maryland border about 6 miles from Camp David. After the Sept. 11 terrorist attacks, former Vice President Dick Cheney used it as a command post, according to the Fox report.

Last year, the facility got about $45 million in government funding for upkeep.

In a 1991 archived report from the Pittsburgh Press, the bunker complex has 265,000 square feet of operating space.

Noting that it was built under the Truman administration after the Soviets detonated their first nuclear bomb, “The idea then was to have a ‘survivable’ command center that was close to Washington, D.C.,” according to the Press.

“We have always shrouded this place in secrecy,” said Lt. Col. Art Maxwell, who was stationed at Fort Richie, in the now-archived report.

Raven Rock, the report said, was picked because there is lots of greenstone, which is a type of granite. Greenstone is the fourth-hardest rock in the world, Maxwell noted.

Garrett Graff, an author, told the Philly Voice in 2017 that the facility has “everything else you would find in a normal small city.” Graff said that around 100 people work there, but he claimed that as many as 5,000 could be stationed there in case of an emergency.

“Raven Rock today is a much more capable and larger facility than it was during the height of the Cold War,” Graff explained. “If at this exact moment the president decides he wants to launch nuclear war, or North Korea does, and for whatever reason he’s not able to reach the Pentagon, he would call Raven Rock,” Graff noted.

And the Pittsburgh Press reported that at the time, the Army wouldn’t give tours of Raven Rock. Nearly 30 years later, that still is the case.

The government wants to keep it secret for a reason, said Sharon Weinberger, co-author of the 2018 book “A Nuclear Family Vacation: Travels in the World of Atomic Weaponry.” She obtained a document from the Department of Defense about the military base.

“Remember,” the military document says, “the more the public knows about this facility, the more our adversaries do, and the more vulnerable we become,” Fox reported.

The bombastic claims by Kiselyov, who is said to be close to the Kremlin, came just weeks after Russian President Vladimir Putin said Moscow is ready for a new “Cuban Missile-style” crisis if the United States wanted to get involved in one.

And Kiselyov, in the past, claimed Russia could turn the United States into radioactive ash if it wanted to.

“Every time Putin issues these bombastic threats and touts his new doomsday devices, he should know he only deepens NATO’s resolve to work together to ensure our collective security,” Eric Pahon, a Pentagon spokesman, told Reuters.

The United States recently quit the 1987 Intermediate-range Nuclear Forces (INF) Treaty over what it said was a violation on behalf of the Russians.

In early February, President Donald Trump said, “We cannot be the only country in the world unilaterally bound by this treaty, or any other.”

Secretary of State Mike Pompeo also said at the time that if within six months, Russia accepts the U.S.’s demands to destroy cruise missiles that Washington says are in violation of the pact, the treaty can be saved. If not, the “treaty terminates,” Pompeo said, reported The Associated Press.