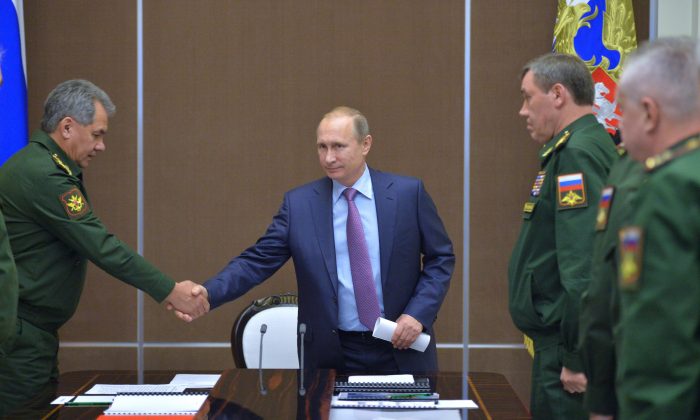 FILE In this Tuesday, Nov. 10, 2015 file photo Russian President Vladimir Putin, centre, shakes hands with Defense Minister Sergei Shoigu at a meeting with defense officials in the Bocharov Ruchei residence in the Black Sea resort of Sochi, Russia. President Vladimir Putin's spokesman said plans for a new submarine-launched nuclear torpedo shown on Kremlin-controlled television were secret and should never have been aired. NTV and Channel One showed a large document  filmed over a military officer's shoulder during a meeting with Putin  with drawings and details of a weapons system called Status-6. Second right is Chief of the General Staff of the Russian Armed Forces Valery Gerasimov. (Alexei Druzhinin/RIA Novosti, Kremlin Pool Photo via AP)
Europe

MOSCOW (AP) — Details of a new Russian submarine-launched nuclear torpedo have been shown on state-controlled TV, a secret the Kremlin said should never have been aired. Some observers, however, saw it as a deliberate leak.

The airing of the video on television channels under tight Kremlin control raised suspicions that it was done intentionally to scare the West at a time when its ties with Russia are at the lowest point since the Cold War.

NTV and Channel One showed a large document — filmed over a general’s shoulder during a meeting with Putin — with drawings and details of a prospective weapons system called Status-6.

The channels later removed the footage, which was shot during a meeting on Monday in Sochi.

“It’s true that some secret information was caught by the camera and therefore it was subsequently removed,” Putin spokesman Dmitry Peskov said late Wednesday. “We hope this will not happen again.”

Independent experts noted, however, that it would be hard to imagine cameramen of state TV stations doing a close up on any documents on the table during a Kremlin meeting on military issues. Most saw the incident as a deliberate leak intended to warn Washington and its allies that Russia is working on a new devastating weapon that would tip the scales in case of conflict.

“I have a feeling it was shown in order to scare the world,” said Alexander Golts, an independent Moscow-based military analyst. “It’s an attempt to offer an asymmetrical answer to the U.S. missile defense.”

Putin has held four meetings on defense issues in as many days this week, reflecting the close attention he is paying to military modernization at a time of heightened tensions with the United States and Europe over the crisis in Ukraine.

The Russian leader described NATO’s U.S.-led missile defense program as an attempt to break nuclear parity and warned that Moscow would counter it by deploying new strike weapons capable of piercing the shield.

Military experts and commentators traced the nuclear torpedo concept to the 1950s, when it was first offered by Andrei Sakharov, the father of Soviet thermonuclear bomb who later came to defy the Soviet system and won a Nobel Peace Prize. He proposed targeting the U.S. with high-yield nuclear torpedoes that would create huge tsunami waves and high levels of radioactivity to render large coastline areas uninhabitable.

The proposal was rejected, partly because naval technology of the era wouldn’t allow a Soviet submarine to approach the U.S. shore undetected.

The Status-6 appears to be a new reincarnation of the old idea, said Pavel Felgenhauer, an independent military analyst.

“The plan is to deliver a 100-megaton nuclear bomb to the U.S. shores,” he said. “It would cause a highly radioactive tsunami.”

The details of the new weapon shown on Russian state TV indicated that the torpedo, described as a “self-propelled underwater craft” should have a trans-ocean range of 10,000 kilometers (5,400 miles), something military experts considered hardly possible.

But while the torpedo’s real range could be much shorter, its relatively small size, a purported operational depth of 1,000 meters (3,280 feet) and a speed of 105 kilometers (65 miles per hour) appear realistic, making it difficult to spot and destroy, some observers said.

“Detecting it could be significantly different from detecting a submarine,”said Pavel Podvig, an independent analyst based in Geneva, where he runs his research project focusing on Russian nuclear forces.

The government daily Rossiyskaya Gazeta alleged that in order to achieve the stated purpose of “extensive radioactive contamination” of coastal areas, the project could envisage using the so-called cobalt bomb, a nuclear weapon designed to produce enhanced amounts of radioactive fallout compared to a regular atomic warhead.

Podvig said the apparent deliberate leak of the Status-6 details looks menacing, irrespective of how realistic the project is from the technological viewpoint.

“The whole thing just strikes me as crazy,” he said. “This is the way they believe they could show their strength and resolve. It’s basically very unsettling that this kind of project appears anywhere near a meeting with the president.”