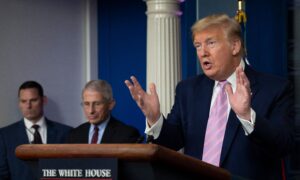 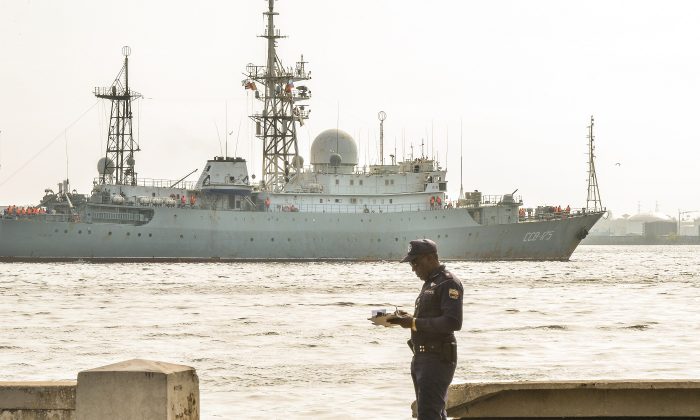 Russian Vishnya (also known as Meridian) class warship CCB-175 Viktor Leonov arrives at Havana's harbor on Feb. 27, 2014. The Vishnya class ships are used for gathering intelligence. Those ships were built in the 1980s for the Soviet Navy and are still deployed within the Russian fleet. This is the second visit of the warship to Havana. (ADALBERTO ROQUE/AFP/Getty Images)
US

A Russian spy ship appeared off the coast of Georgia on the U.S. East Coast on Wednesday, with new reports saying it is monitoring activity near a U.S. nuclear submarine base at King’s Bay.

The ship, the Viktor Leonov, was spotted about 30 miles east of a nuclear submarine base in Connecticut in February. It apparently traveled south along the eastern seaboard and is positioned near Georgia, CBS News reported. The closest it got to the U.S. mainland is 17 miles.

The ship, which is armed with surface-to-air missiles, but is designed to gather intelligence, also traveled to Virginia to monitor naval activities in Norfolk.

The Viktor Leonov has a port of call in Jamaica, CBS added. However, there’s an assumption among American intelligence officials that the ship will make another trip down the U.S. east coast before it arrives in Jamaica.

“I think Putin probably assumes that he can’t make a deal with me anymore because politically it would be unpopular for a politician to make a deal – I can’t believe I’m saying I’m a politician but I guess that’s what I am now – because, look, it would be much easier for me to be tough on Russia but then we’re not going to make a deal,” Trump was quoted as saying at the time.

“The greatest thing I could do is shoot that ship that’s 30 miles offshore right out of the water. Everyone is going to say that’s so great. That’s not great. I would love to get along with Russia,” Trump also stated, referring to the vessel.

When the ship arrived near Connecticut, a Pentagon spokesperson responded.

“It’s lawful [and] similar to operations we do around the world,” Pentagon spokesman Capt. Jeff Davis told Fox News in February.