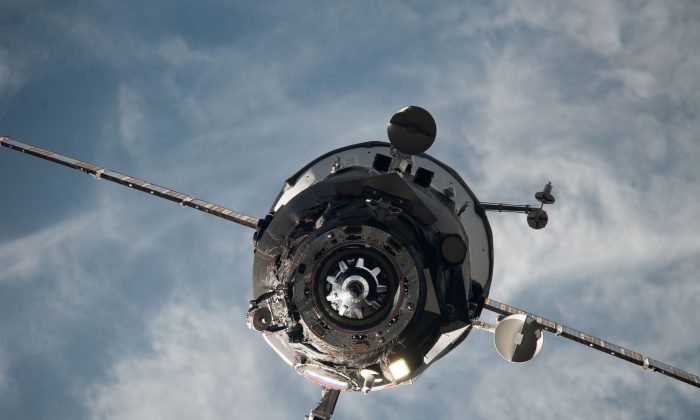 In this Feb. 5, 2014 photo provided by NASA, an ISS Progress resupply vehicle approaches the International Space Station. On Wednesday, April 29, 2015, NASA and the Russian Space Agency declared a total loss on an unmanned Progress capsule, carrying 3 tons of goods to the station. The spacecraft began tumbling when it reached orbit Tuesday, following launch from Kazakhstan, and flight controllers were unable to bring it under control. (NASA via AP)
International

An unmanned Russian cargo spacecraft is hurtling back to Earth after an aborted attempt to resupply the International Space Station (ISS). Progress 59 started spinning uncontrollably after successfully reaching orbit on April 28. The docking, scheduled for Thursday morning, had been”indefinitely postponed,” according to a NASA representative.

Now, a Russian official said that the spacecraft is falling back to Earth.

“It has started descending. It has nowhere else to go,” an anonymous official told AFP. “It is clear that absolutely uncontrollable reactions have begun.”

Progress 59 had successfully launched from the Baikonur Cosmodrome in Kazakhstan on the morning of April 28, but unspecified system malfunctions appeared in its first orbit.

Controllers tried to fix the problem by extending the spacecraft’s mission duration from six hours to two days, but was unsuccessful and lost control of the supply craft thereafter.

The spacecraft had been carrying more than 6,000 pounds of fuel, water, and spare hardware for the space station crew, but NASA said that it had not carried any critical supplies for the American section of the space station.

The next mission to the ISS—a SpaceX commercial resupply of 5,000 pounds of material—is scheduled for June 19 at the earliest.

Russia’s Progress spacecrafts have been servicing the ISS since its inception in 2011, with a history of success apart from the 2011 launch failure of a Progress 44 cargo ship. Normally, after successful supply missions the crafts are left to burn up upon re-entry into the earth’s atmosphere.

The debris from the Progress 59 is expected to hit the ground between May 7 and May 11, according to an official from Roscosmos, the Russian space agency.

NASA has also had its share of supply craft failures. In October, an unmanned Cygnus cargo ship burst into flames seconds after it launched off the Virginian coasts.