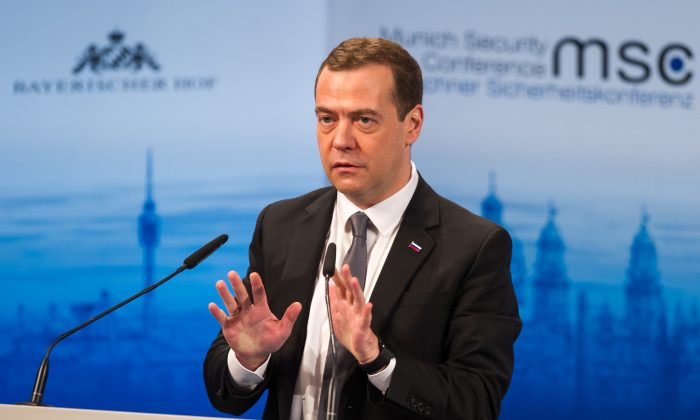 MUNICH—Russia’s prime minister accused the West on Saturday of rekindling the Cold War, telling a meeting of top defense officials, diplomats and national leaders that sanctions imposed after the annexation of Crimea and new moves by the NATO alliance “only aggravate” tensions.

Dmitry Medvedev said Russian President Vladimir Putin told the same Munich Security Conference in 2007 that the West’s building of a missile defense system risked restarting the Cold War, and that now “the picture is more grim; the developments since 2007 have been worse than anticipated.”

NATO’s policies related to Russia remain unfriendly and opaque—one could go so far as to say we have slid back to a new Cold War.
— Dmitry Medvedev, prime minister, Russia

“NATO’s policies related to Russia remain unfriendly and opaque—one could go so far as to say we have slid back to a new Cold War,” he said.

NATO Secretary General Jens Stoltenberg threw the blame back at Moscow. “Russia’s rhetoric, posture and exercises of its nuclear forces are aimed at intimidating its neighbors, undermining trust and stability in Europe,” he said.

Russia’s rhetoric, posture and exercises of its nuclear forces are aimed at intimidating its neighbors, undermining trust and stability in Europe.
— Jens Stoltenberg, secretary-general, NATO

“It’s nothing about cold,” she said. “It is already very hot.”

Speaking after Medvedev, Kerry fired back that Europe and the United States would continue to “stand up to Russia’s repeated aggression” and noted that in addition to a joint focus on Ukraine, Washington had quadrupled spending to help European security. That will allow the U.S. to maintain a division’s worth of equipment in Europe and an additional combat brigade in central and eastern Europe.

“Those who claim our trans-Atlantic partnership is unraveling—or those who hope it might unravel—could not be more wrong,” Kerry said.

Medvedev’s comments came shortly after Stoltenberg told the group that in response to a “more assertive Russia… which is destabilizing the European security order,” the alliance does “not want a new Cold War but at the same time our response has to be firm.”

Stoltenberg stressed the need for dialogue, but also defended NATO’s move to strengthen defenses, including moving more troops and equipment to countries bordering Russia, and said at an upcoming summer summit in Warsaw he expected member countries “to decide to further strengthen the alliance’s defense and deterrence.”

He underlined that NATO’s deterrent also included nuclear weapons, saying “no one should think that nuclear weapons can be used as part of a conventional conflict—it would change the nature of any conflict fundamentally.”

Medvedev scoffed at what he said was a suggestion that Russia may use nuclear weapons in a first strike. “Sometimes I wonder if it’s 2016 or if we live in 1962,” he said, referring to the year of the Cuban missile crisis.

He called for sanctions on Russia imposed after it annexed Crimea from Ukraine in March 2014 to be lifted, saying they were “a road that leads nowhere.”

Earlier in the day, Medvedev suggested the West would harm itself if it did not lift the sanctions soon.

“The longer the sanctions continue, chances for the Europeans to keep their position at the Russian market as investors and suppliers are fading,” he said. “That’s why one has to act quickly.”

Kerry said if Russia wants an end to sanctions, it has the “simple choice” to fully implement the Minsk peace accord agreed upon last year.

“Russia can prove by its actions that it will respect Ukraine’s sovereignty, just as it insists on respect for its own,” he said.

He also called upon Russia to strive for a peace deal in Syria, saying that its continued support of President Bashar Assad would just increase “the call to jihad” and complicate the fight against the Islamic State (ISIS).

He said Russia and Assad are wrong if they think “indiscriminate bombing” will win the war.

“The Syrians who have rejected Assad have endured four years of shelling, barrel bombs, gas, Scud missiles, chemical attacks, torture,” Kerry said. “They may be pushed back here or there, but they are not going to surrender.”

Ukraine’s President Petro Poroshenko blasted Russia’s actions in both Ukraine and Syria, saying they are “a demonstration that we live in a completely different universe with Russia.”