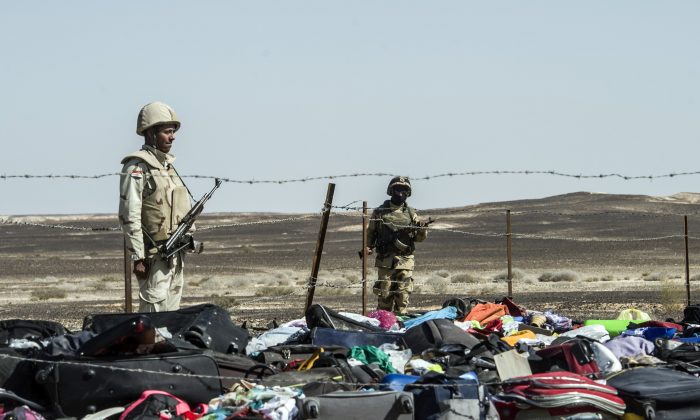 Egyptian army soldiers next to the luggage and belongings of passengers of the A321 Russian airliner piled up at the site of the crash in Wadi al-Zolomat, a mountainous area in Egypt's Sinai Peninsula, on Nov. 1, 2015. (Khaled Desouki/AFP/Getty Images)
Europe

A smiling, bearded fighter holding a rocket launcher looks toward the sky; in the sky are written the words, “Good weather and clear skies … are perfect for downing Russian planes.”

Such are the propaganda images shared via Twitter on Saturday and Sunday following the crash of a Russian passenger plane in Egypt’s Sinai Peninsula, killing all 224 people on board.

A group associated with ISIS, called Wilayat Sinai  has claimed responsibility for shooting down the plane. Wilayat Sinai gained a significant presence in the peninsula after extremists in the region pledged allegiance to it in 2014, proclaiming the area “Sinai Province.”

After a series of deadly attacks, much of the Sinai is now a restricted military zone.

After Kogalymavia Flight 9268 crashed on Saturday morning, ISIS took responsibility for a terrorist attack circulating a statement on social media saying it conducted the attack for Russian airstrikes against extremists in Syria. Later, the group started circulating a photo of a bearded man holding a rocket launcher, suggesting he shot down the plane.

#Egypt #ISIS Claim Responsibility for shot down the Russian Aircraft over Sinai #IS #ISIL pic.twitter.com/tBCRt7Xen1

“The soldiers of the caliphate succeeded in bringing down a Russian plane in Sinai,” the ISIS statement reads, according to a translation.

Experts have described the group’s claims as improbable. It’s doubtful that man-portable air-defense systems (MANPADS) would be able to hit a plane traveling above 30,000 feet, which is how high the Russian jet was flying. MANPADS are generally a threat to low-flying aircraft, namely helicopters.

Official: Russian Jet Broke Up at High Altitude Over Egypt

“Whether or not ISIS took down the Russian plane, they want to take credit for it,” geopolitical expert Ian Bremmer, who is president of Eurasia Group, tweeted on Saturday. “[Russian President Vladimir] Putin’s Syria intervention makes Russia a top target.”

Another analyst, Mokhtar Awad, with the Center for American Progress, echoed Bremmer’s statement, saying that in Wilayat Sinai’s vague claim, they don’t explain “how they were able to ‘down’ the plane,” he told the Guardian, adding, “The most sophisticated of portable surface-to-air missiles cannot reach that high an altitude and are only a threat during periods of take-off or landing, but the plane had already climbed to its target altitude” before it began to experience technical failures.

Awad said the ISIS affiliate, “may have jumped the gun on taking credit.”

Charles Lister, a Middle East expert and fellow at the Brookings Doha Center, also noted on Twitter, “the most advanced anti-air weapon” ISIS has in its arsenal is the SA-18 Igla MANPADS, which only have a range of around 10,000 feet in altitude.

Delving into ISIS’s claim, Lister said there were several possibilities: First, the ISIS claim is false; second, there may have been a bomb planted on the plane; or third, ISIS obtained anti-air missiles capable of hitting the plane.

He assessed the third option is the “least likely” scenario, since Egypt isn’t known “to have lost” advanced air defense systems, he wrote. The bomb option “is feasible,” but added that ISIS has made dubious claims in the past about terrorist attacks, pointing to the Bardo Museum attack in Tunisia earlier this year that was later debunked. The Tunisian government later blamed an al-Qaeda affiliate as being responsible.

Russian officials have vehemently denied ISIS was involved in the crash, with Transportation Minister Maksim Sokolov saying, “This information cannot be considered accurate,” in comments cited by Russian media outlets.

“We are in close contact with our Egyptian colleagues and aviation authorities in the country. At present, they have no information that would confirm such insinuations,” he continued.

Victor Sorochenko, the head of Russia’s aviation accident investigation body, confirmed the Russian plane, an Airbus A321, broke up in midair. He said the wreckage was spread out over an area of around 12 miles and was not in one debris field. “The destruction [of the plane] happened in the air and the fragments scattered over a large area,” he said, according to state-run Russia Today.

Sokolov said the plane’s data and cockpit voice recorders were recovered, but he stressed that it’s not clear when the boxes will be examined.