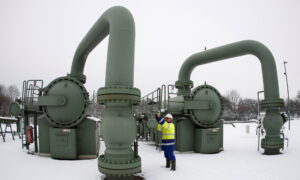 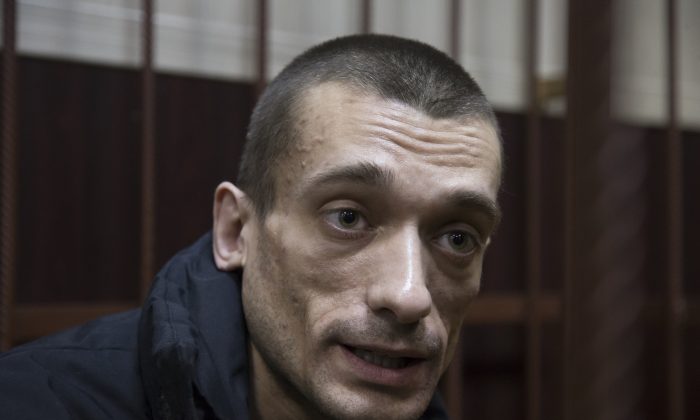 Russian artist Petr Pavlensky speaks to journalists as he sits in a cage in court room in Moscow on March 31, 2016. (AP Photo/Ivan Sekretarev, file )
Europe

MOSCOW— A Russian performance artist known for his radical politically charged performances was convicted Thursday of vandalism for a pro-Ukraine protest and sentenced to 16 months in prison.

A court in Moscow found Pyotr Pavlensky guilty, though he won’t have to serve prison time because the statute of limitations had expired. But he remains in custody while awaiting trial in Moscow in a second case.

Pavlensky was convicted for a performance on Feb. 23, 2014, in which he and other activists had waved Ukrainian flags, burned tires and banged metal sheets with sticks near a St. Petersburg cathedral. The performance, called “Freedom,” was in imitation of the Kiev mass street protests that had ousted Ukraine’s pro-Russia president two days before.

Pavlensky was arrested and jailed in November 2015 after he set fire to the doors of the headquarters of the Federal Security Service, the main KGB successor agency in Moscow. His associates released a video on his social media account that showed him standing next to the burning door and holding a gasoline canister. In a script accompanying the video, Pavlensky said it was meant as a protest against what he called the heavy-handed tactics of the agency, known by its Russian acronym FSB.

He is now on trial on charges of damaging an object of cultural significance. If convicted, he could face up to five years in prison.

In his arguably most shocking performance, Pavlensky in 2013 nailed his scrotum onto the cobbles of the Red Square in what he said was “a metaphor for the apathy, political indifference and fatalism of modern Russian society.”

He also has sewed his mouth closed to condemn the imprisonment of three members of the punk music group Pussy Riot for protesting against President Vladimir Putin, and wrapped a cocoon of barbed wire around his naked body outside the St. Petersburg legislature to protest repressive government policies.