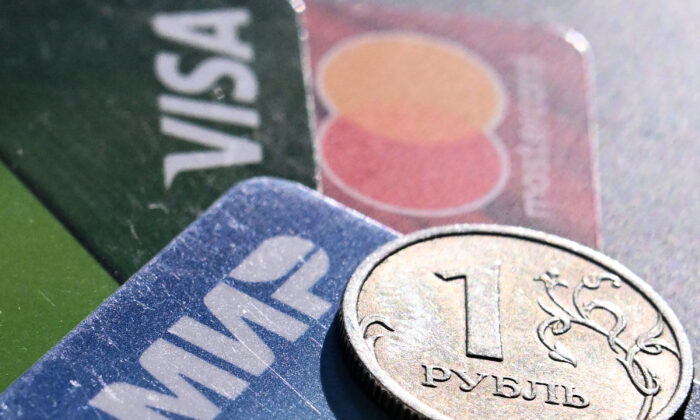 A photo shows a Russian ruble coin and the logos of Visa, Mastercard, and Russian Mir payment systems on bank cards in Moscow on March 14, 2022. (AFP via Getty Images)
Economic Policies

Domestic credit and debit transactions in the Russian Federation have been largely unaffected by Western sanctions and the voluntary withdrawal of card companies from the country, due to an alternative system for managing domestic payments that was developed in the late 2010s.

In the aftermath of President Vladimir Putin’s 2014 annexation of Crimea and the subsequent backlash from the Western bloc, Russia began the development of an alternative payments system that could insulate the country’s economy from Western sanctions.

This system, called Mir, runs on the infrastructure of the National Payment Card System (NSPK, an acronym derived from the system’s Russian name), and it has allowed ordinary Russians to continue using their cards even as the companies behind said cards have officially cut ties with their country.

Now the country is reaping the benefits of its preparation for the worst, as Western sanctions have taken their due toll on the nation’s economy. However, the infrastructure undergirding Russia’s domestic payment system remains largely unaffected by these sanctions, constituting a silver lining for Russia’s rapidly failing economy.

When Visa and MasterCard pulled out of Russia earlier this month, the move was greeted with much fanfare by the Western press, but its significance for Russia’s economy may have been overestimated.

According to the Nilson Report, 197 million Mastercard or Visa cards were active in Russia at the end of 2020. For most Russians, those cards will remain functional even as the companies whose branding decorates the cards declare their withdrawal from the Russian Federation, as the Mir system has already been handling such transactions within Russia since the late 2010s.

However, the NSPK infrastructure has limited reach outside of Russia’s borders, making financial transactions through the major card providers difficult for holders of Russia-based Mastercard and Visa cards abroad.

At present, the NSPK operates within a small set of countries outside of Russia: Armenia, Turkey, Uzbekistan, and the United Arab Emirates, as well as the Russian-occupied Abkhazia region of Georgia. While Russian state-affiliated media reported that efforts were in progress to expand NSPK to Russian allies Iran and Venezuela, such efforts are germinal.

Notwithstanding the difficulty of financial transactions for Russians abroad, the development of the Mir system has given Russia one of its few economic victories over Western sanctions in the ongoing conflicts over Ukraine: While Visa and Mastercard have attempted to use their leverage to further punish Putin for the invasion, they have found that their efforts are largely futile, as the Russian government has pre-empted their actions and prepared its own infrastructure for managing the payment transactions of its citizens.