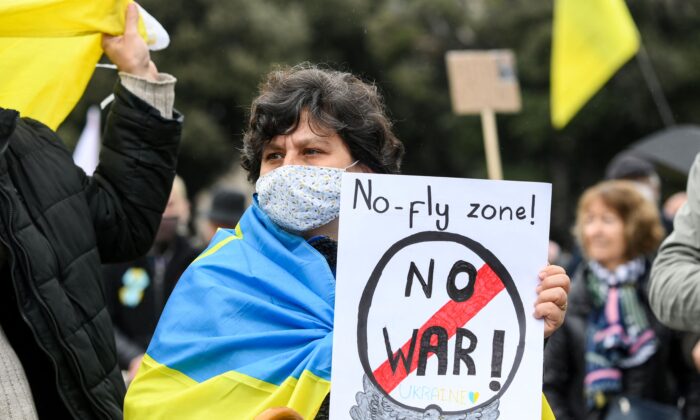 A demonstrator wearing a Ukrainian flag on the shoulders holds a sign reading "No-fly zone! No war!" during a demonstration in support of Ukraine and to protest against Russia's invasion of the country, on the Plaza Catalunya square in Barcelona, on March 6, 2022. (Lluis Gene /AFP via Getty Images)
Russia-Ukraine War

A superyacht linked to the owner of Russia’s largest steel pipe maker, subject to sanctions by the European Union due to the Ukraine invasion, has been seized by authorities after docking in Gibraltar.

Western sanctions on Russian oligarchs over Russian President Vladimir Putin’s invasion of Ukraine have triggered an exodus of luxury yachts from Europe in recent weeks, with several heading towards the Maldives, which has no extradition treaty with the United States.

According to Reuters, Dmitrievich Pumpyansky, who owns the Russian steel group TMK, is subject to British and European sanctions over Moscow’s invasion of Ukraine, which began on Feb. 24.

The luxurious 72-meter vessel, named the Axioma, was seized after coming in to dock in the British overseas territory.

The vessel is owned by a British Virgin Islands holding company called Pyrene investments, Refinitiv data show. An article published by the International Consortium of Investigative Journalists as part of the Panama Papers leaks names Pumpyansky as a beneficiary of the holding.

Forbes and specialist publication Superyacht Fan also list him as the Axioma’s owner.

In a statement, the Gibraltar government confirmed that the Axioma had arrived in port after asking permission to enter and “was confirmed to be the subject of an arrest action by a leading international bank in the Supreme Court of Gibraltar.”

“The vessel is now subject to arrest by the Admiralty Marshal until further order,” it said, without specifying the legal claims from creditors against the vessel or the vessel’s owner.

The vessel had departed Antigua on Feb. 27 and was at sea for three weeks before docking in Gibraltar, according to Refinitiv data.

Earlier on Monday, a superyacht linked to Russian oligarch Roman Abramovich, the sanctioned owner of Chelsea football club, docked in the seaside city of Bodrum in southwest Turkey, according to shipping data obtained by Reuters.

The vessel, named Solaris, had recently departed from waters near the European Union.

A group of protesters in an inflatable dinghy carried signs saying “No War” and waved Ukrainian flags as the ship docked in the Turkish port, the Mail Online reported.

It comes as Russia’s invasion of Ukraine approaches the one-month mark.

Ukrainian President Volodymyr Zelensky on Sunday suggested holding potential peace talks with Russia in the city of Jerusalem, saying in a video address that Israeli Prime Minister Naftali Bennett “is trying to find a way to negotiate with Russia.”

The Israeli prime minister has been working to act as an intermediary between the two countries amid the ongoing conflict “so that sooner or later we start talking to Russia, perhaps in Jerusalem,” Zelensky said in a video on his Telegram channel.

“This is the right place to find peace. If it is possible,” he said.

Zelensky also told Ukrainian television channels late Monday that Ukraine is ready to discuss a commitment that the country will not seek NATO membership in exchange for a cease-fire, the withdrawal of Russian forces, and a guarantee of Ukraine’s security.