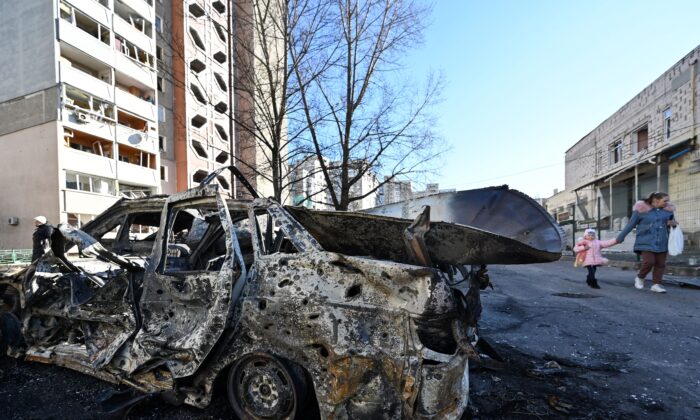 A view of the car which was destroyed by recent shelling in the outskirts of Kyiv, Ukraine, on Feb. 28, 2022. (Genya Savilov//AFP via Getty Images)
Russia-Ukraine War

A Russian journalist has been killed during shelling by Russian forces at a shopping center in the Ukrainian capital of Kyiv, according to reports.

Oksana Baulina, 42, was reporting for independent Russian investigative news website The Insider when she was caught up in shelling by Russian forces, the outlet said in a statement.

The journalist, who formerly worked for Russian opposition leader Alexander Navalny’s Anti-Corruption Foundation, was “filming the destruction after Russian troops shelled” Kyiv’s Podil district, according to the statement.

Baulina was one of two people killed in the attack on the shopping center, while two others who accompanied her were wounded and hospitalized, the media outlet reported.

“Oksana went to Ukraine as a correspondent, she managed to send several reports from Lviv and Kyiv,” the statement reads. “The Insider expresses its deepest condolences to Oksana’s family and friends.

“We will continue to cover the war in Ukraine, including such Russian war crimes as indiscriminate shelling of residential areas which result in the deaths of civilians and journalists.”

Baulina’s career spanned from stints with lifestyle magazines, including Time Out Moscow and InStyle, and she later became a producer for the Anti-Corruption Foundation.

At least five journalists have died since Russian forces invaded Ukraine on Feb. 24.

In December 2021, The Insider, which is on an official Russian list of “foreign agents,” was fined for breaking a law that requires it to attach a disclaimer to its publications and subjects it to increased bureaucratic scrutiny.

The Insider has worked with Dutch-based website Bellingcat on projects including an investigation into the 2021 nerve agent poisoning of Kremlin critic Navalny.

Moscow’s Tagansky District Court fined The Insider 1 million rubles ($13,600) for failing to identify itself as a foreign agent. Repeated violations of the law can lead to an organization being closed altogether.

The designation also requires media outlets to regularly report on their earnings and spending to the justice ministry.

Friends & colleagues of slain journalist Oksana Baulina are describing their last interactions with her, often sharing screenshots of what proved to be their final correspondence. Olga Shakina at the human rights group Department One remembered Baulina in a message on Telegram. pic.twitter.com/Rxy212XkVX

Baulina’s colleagues took to Twitter to mourn her death.

Former colleague Alexey Kovalyov remembered Baulina in a Twitter post as a “journalist with a phenomenal sense of moral clarity.”

“She was our steadfast upstander and would always help,” Yarmysh said. “I don’t even know how to speak about her death and can’t even imagine all of this.”

Bellingcat investigative reporter Christo Grozez remembered her as “an amazingly brave Russian journalist” who was “killed by her own country’s army shelling civilian areas in the Podil district in Kyiv.”

“She was killed while reporting on the damage caused by the shelling,” Grozev said.