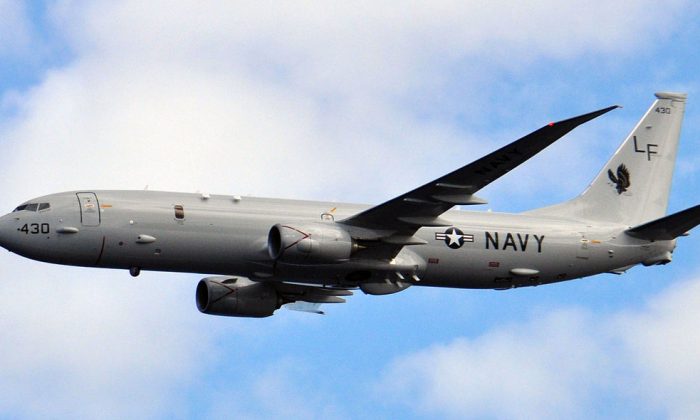 A Russian jet “buzzed” a U.S. Navy spy plane over the Black Sea in a move that U.S. officials described “provocative” and “unsafe.”

The Pentagon told CNN Monday that a Russian Su-30 fighter jet intercepted a P-8A Poseidon plane on Saturday. “The US aircraft was operating in international airspace and did nothing to provoke this Russian behavior,” Lt. Col. Michelle Baldanza, a spokeswoman for the Pentagon, was quoted as saying.

The aircraft crossed in front of the U.S. spy plane in a left-to-right manner while using its afterburners, forcing the Poseidon to enter the Russian plane’s jet wash. An official told Fox that this caused “violent turbulence” for the U.S. plane.

The incident lasted about 24 minutes in all, the official said. Another official added that the Russian Su-30 flew “erratically,” according to a Fox News report.

Pentagon: Russian Su-30 jet made "unsafe" intercept of US Navy P-8 Saturday in international airspace over the Black Sea. Russian jet crossed in front of P-8 while engaging afterburners, forcing the US plane to fly through its jet wash causing "violent turbulence"

Baldanza said the Russian jet came within 50 feet of the U.S. aircraft. The P-8 had its flight transponder on during the “provocation,” officials said.

In June, a Russian aircraft got within a dangerous 5 feet of a U.S. spy plane near the Baltic Sea. Then, a Russian Su-27 approached a U.S. RC-135 reconnaissance plane and acted “provocatively” and performed “unsafe” maneuvers, an official said at the time, per Fox News.

Earlier this year, Russian jets were involved in an “unsafe” encounter with a U.S. destroyer, officials told Reuters. “USS Porter queried all aircraft and received no response,” the official said at the time. “Such incidents are concerning because they can result in accident or miscalculation,” they added.

One encounter involved two Russian Su-24 jets, another incident a separate Su-24, and the third encounter a larger IL-38.

In April, 2016, two Russian warplanes flew simulated attack passes near a U.S. guided missile destroyer in the Baltic Sea so close that they created wake in the water.