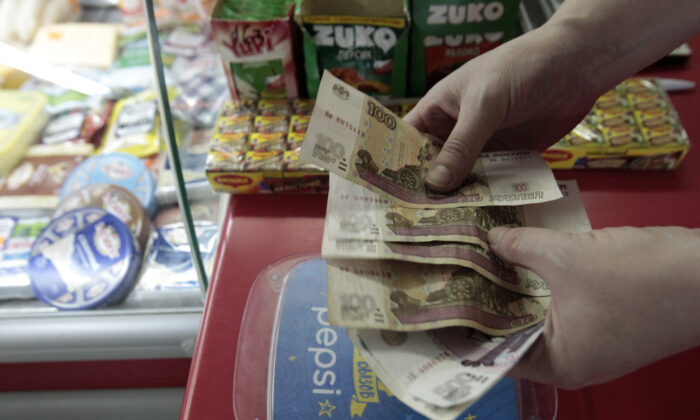 Russia’s annual inflation hit 14.53 percent as of March 18, up from 12.54 percent a week ago as the country’s economy and currency struggle against severe sanctions imposed by the West due to Moscow’s invasion of Ukraine. This is the highest annual inflation rate since November 2015.

Inflation for the week ending March 18 was 1.93 percent, slightly lower than the 2.09 percent inflation rate of the previous week, data from state statistics service Rosstat showed. The year-to-date increase in inflation was 7.67 percent.

Inflation rates spiked following the Ukraine invasion which resulted in the ruble tumbling to an all-time low in early March. Though the currency has recovered to some extent since then, uncertainties about the future still remain a concern. Demand for goods, right from food staples to cars, have risen steeply on expectations that their prices will soon rise even more.

The cost of sugar, which is used to make liquor and preserve food, rose by an average of 14 percent. In some regions, sugar prices spiked by up to 37.1 percent.

“People are sharing tips about where to get sugar. This is crazy,” a Russian citizen said to The Guardian. “It’s sad and it’s funny. It feels like a month ago was fine and now we’re talking about the 1990s again, buying products because … we’re afraid they’ll disappear.” The person had to wait an hour and half to procure a five-kilo bag of sugar.

Onion prices saw the second-highest increase over the week, rising by 13.7 percent across the country and up to 40.4 percent in certain regions. Black tea prices rose by four percent, nappies by 4.4 percent, and toilet paper by three percent.

Some products like tampons are in shortage. Prices of imported items like toothpaste, clothing, Tide detergent, etc. spiked as the ruble declined in value.

“The biggest culprit is imported inflation,” Stephen Innes, managing partner at SPI Asset Management, said to BBC. “Anything Russia imports is exponentially (pricier) due to the weaker ruble.” The Russian government insists that it has enough supplies to satisfy the demand for basic goods and is blaming speculators and panic buying for the price hikes.

The Russian central bank maintained its key interest rate at 20 percent in March. The bank warned of an imminent spike in inflation and expects it to slow down to the target annual rate of 4 percent in 2024.

“There were already shortages of goods from the European Union because there was a mutual exchange of sanctions after the invasion of Crimea.” Though Russia has tried to sanction-proof its economy in recent years, the severity of Western sanctions is still having an effect on the country, he added.