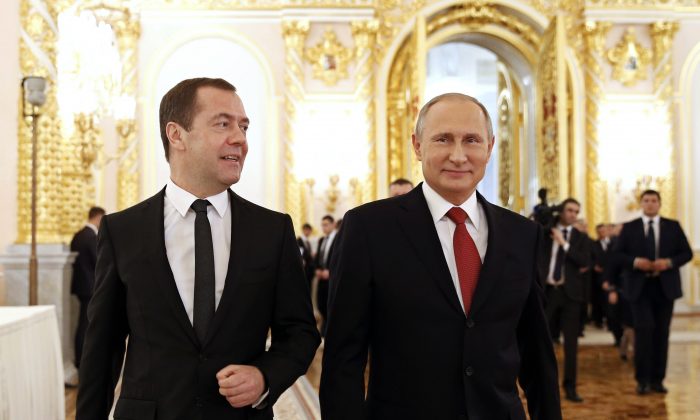 Russian Prime Minister Dmitry Medvedev said Jan. 15 that he’s submitted his resignation to President Vladimir Putin to give the president room to make changes to the constitution.

In a statement carried by the state-backed TASS News Agency, Medvedev said his government should step down in the wake of Putin’s proposals to change the constitution. Putin’s speech and Medvedev’s announcement were also carried via Russian television stations.

“After those amendments are adopted—and it was said that this is likely to be done following discussion—there will be significant changes not only to a variety of constitution articles, but to the balance of power, namely to the executive, legislative, and judicial branches of power,” the prime minister said.

Medvedev noted that following Putin’s proposals, Medvedev’s government “should provide our country’s president with an opportunity to take all the necessary decisions in these conditions.”

“I believe it right for the government of the Russian Federation to step down in conformity with Article 117 of Russia’s Constitution,” Medvedev said.

Without much detail, Putin thanked Medvedev and his government for their work, TASS reported.

“For my part, I also want to thank you for everything that was done at this stage of our joint work, I want to express satisfaction with the results that have been achieved,” he said, according to TASS. “Not everything was done, but everything never works out in full.”

The statement came after Putin gave a televised speech in front of officials, in which he suggested amending the country’s constitution to limit a future president to only two terms in office. Putin has served four terms and has said he wants to step down in 2024. According to The Guardian, Medvedev, after stepping down as prime minister, was appointed to a new position as deputy chairman of Russia’s Security Council.

Putin added in his speech that he wants to give the State Duma, the lower house of Parliament, the power to choose Russia’s prime minister and other key positions.

“Of course, these are very serious changes to the political system,” Putin said. “It would increase the role and significance of the country’s Parliament … of parliamentary parties, and the independence and responsibility of the prime minister.”

Putin’s critics have accused him of wanting to remain in power after he steps down in 2024 and assume an enhanced role as prime minister.