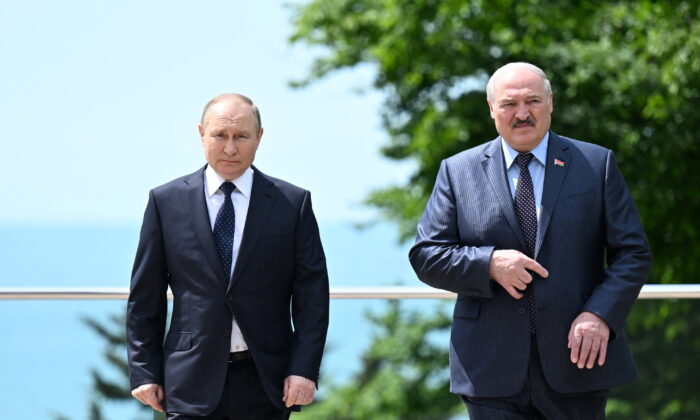 A barrage of missiles was fired from Belarus on June 25 as Kyiv accused Moscow of dragging Belarus into the war, even as Minsk has officially stayed out of the conflict.

At about 5 a.m. on June 25, 20 rockets targeted the village of Desna in the northern Chernihiv region of Ukraine, according to the country’s northern military command. The bombardment damaged infrastructure, and no casualties have been reported.

“Today’s strike is directly linked to Kremlin efforts to pull Belarus as a co-belligerent into the war in Ukraine,” the Ukrainian intelligence service stated, according to AFP.

Desna is a village that lies roughly 43 miles north of Kyiv and a similar distance from the Belarus border, with a population of around 7,500.

Rockets were fired from the ground and air. After taking off from a Russian airbase, six bombers fired 12 cruise missiles from Petrykaw, Belarus. The Russian forces hit targets in Kyiv and Sumy regions as well. This is the first time since the invasion that the attack has come from Belarusian territory.

“A record number of missiles was fired by Russia on Ukraine this night and morning: more than 60, according to the latest figures. Many were launched from the territory of Belarus. They targeted Kyiv, Lviv, Zhytomyr, Chernihiv, Khmelnytskyi, Dnipro, Mykolayiv, Kharkiv regions,” journalist Olga Tokariuk wrote in a  June 25 Twitter post.

The Russian Ministry of Defense officials didn’t respond to a request for comment by press time.

Belarus has remained a staunch ally of Russia, inviting widespread condemnation and sanctions from Western powers following the Feb. 24 Russian military incursion into Ukraine. The country has provided logistical support to the Russian military, mainly during the early days of the invasion.

A strong supporter of Russia, Lukashenko’s authoritarian regime has ruled Belarus since 1994. He has accused Ukraine of promoting “Nazism to the rank of state ideology,” a common allegation by Russia to justify its invasion of the country.

Putin’s endorsement has enabled Lukashenko to remain as the longest-sitting European president and overcome challenges to his rule. Lukashenko has demanded that his country be part of any resolutions in the Ukrainian war.

“This morning, a despicable attack on [Ukraine] was carried out by the [Russian] army from the territory of Belarus, both from land and air. Russian bombers, not entering Ukraine’s airspace, bombed cities in Zhytomyr and Chernihiv regions. Lukashenka shows his loyalty before meeting Putin today?” Franak Viacorka wrote in a Twitter post.

Viacorka is an adviser to Svetlana Tikhanovskaya, the main opposition leader to Lukashenko, who was forced to leave Belarus and reside in Poland after a presidential election in 2020. Although official results gave the majority to Lukashenko, there were allegations of widespread fraud. Lukashenko repressed subsequent protests.