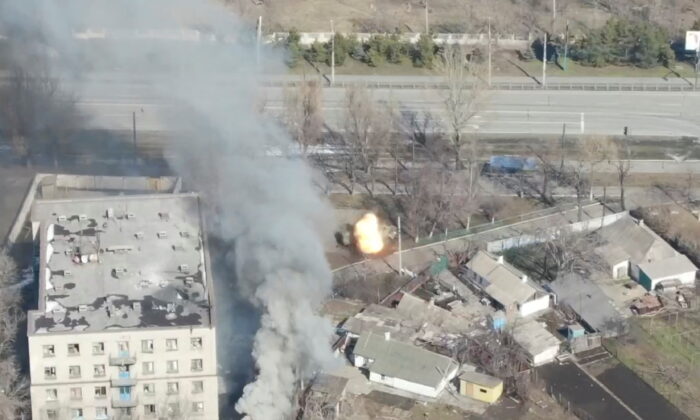 An aeriel view shows smoke rising as an armoured vehicle is shot at next to a building, as Russia's invasion of Ukraine continues, in Mariupol, Ukraine, in this handout drone video obtained by Reuters on March 13, 2022. (Azov Mariupol/Handout via Reuters)
Russia-Ukraine War

A theater in the war-torn Mariupol, Ukraine, was bombed by Russian forces while hundreds of civilians took refuge inside, Ukrainian officials said on March 16.

The Mariupol City Council posted a photo of the destroyed building to social media, saying that Russian troops “purposefully and cynically destroyed the Drama Theater in the heart of Mariupol.”

“The plane dropped a bomb on a building where hundreds of peaceful Mariupol residents were hiding,” the council stated.

The Epoch Times evaluated the picture and confirmed that it’s of the theater in the city.

“It is still impossible to estimate the scale of this horrific and inhumane act, because the city continues to shell residential areas,” the council wrote on Telegram. “It is known that after the bombing, the central part of the Drama Theater was destroyed, and the entrance to the bomb shelter in the building was destroyed.”

❗ URGENT❗
The Russian military attacked #Mariupol‘s Drama Theater, where a large number of citizens were hiding!
It is unknown how many people died under the rubble. Now there are fierce battles. No one can reach the blockages, we don’t know if there are any survivors. pic.twitter.com/xgQStG3CQo

Ukrainian Foreign Minister Dmytro Kuleba and the Verkhovna Rada, Ukraine’s parliament, also said the Mariupol theater was bombed, noting that a number of civilians were allegedly hiding there.

“It is unknown how many people died under the rubble. Now there are fierce battles. No one can reach the blockages, we don’t know if there are any survivors,” the Verkhovna Rada wrote on Twitter. “It is known that after the bombing, the central part of the Drama Theater was destroyed, and the entrance to the bomb shelter in the building was destroyed.”

The bombing comes as U.S. President Joe Biden signed into law on March 15 a package of $13.6 billion in emergency aid to Ukraine to help it obtain more weaponry and for humanitarian assistance. He previously announced a ban on Russian energy imports and called for a suspension of a trading status that lowers tariffs on Russian exports. The House is expected to vote to suspend that status as early as this week.

Russian President Vladimir Putin said on March 16 that Ukraine’s government was trying to obtain nuclear weapons and other “weapons of mass destruction” before the Feb. 24 invasion, according to state-run media outlets.

“They are now trying to sweep up the traces of these secret programs. But we have every reason to believe that in the immediate vicinity of Russia, in Ukraine, components of biological weapons were effectively being created,” Putin said.

U.S. and Ukrainian officials have dismissed the claims that Ukraine was operating laboratories to create biological weapons, saying that such statements are disinformation used to create a pretext for the invasion.