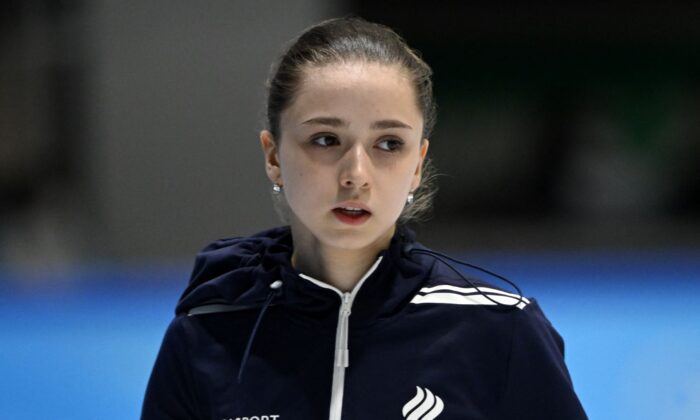 Russian figure skater Kamila Valieva’s earlier positive doping test result may have been due to her grandfather’s heart medication, the teenager’s legal team and an Olympic official said.

Denis Oswald, the International Olympic Committee’s (IOC) permanent chair of the disciplinary commission, said on Tuesday that the teenage athlete claimed her test may have been contaminated with the heart medication her grandfather is taking.

On Feb. 7, it was confirmed that the 15-year-old tested positive for trimetazidine, a banned heart medication that can increase blood flow efficiency and help endurance. The sample was taken from a Dec. 25 test, and she was provisionally suspended by the Russian Anti-Doping Agency (RUSADA).

The Court of Arbitration of Sport (CAS) ruled on Monday to have her suspension reinstated, rejecting appeals by the IOC, the World Anti-Doping Agency (WADA), and the International Skating Union (ISU).

“There can be completely different ways how it got into her body,” the Russian athlete’s lawyer Anna Kozmenko told the CAS panel on Sunday, Russian newspaper Pravda reported.

“For example, her grandfather drank something from a glass, some saliva got in, this glass was somehow later used by an athlete. Or the drug was laid down on some surface, traces remained, the drug lay down on this surface, which the athlete then drank,” the lawyer said.

Oswald said on Tuesday that Valieva’s argument was “this contamination happened with a product her grandfather was taking.”

Ruling in Valieva’s favor, CAS said preventing her from competing would have caused her “irreparable harm in the circumstances.”

CAS, however, did not address the merits of her drug case, which now awaits a RUSADA hearing that is not expected until well after the Winter Games end.

WADA has questioned why the Russian anti-doping authority took so long to report the result.

Valieva broke her silence in an interview with Russia’s Channel One after practice on Monday.

“These (past few) days have been very difficult for me,” she said. “It’s as if I don’t have any emotions left. I am happy but at the same time I am emotionally tired.”

“That’s why tears … Happiness, probably, and a little disappointment. At the same time, I am certainly happy to be at the Olympic Games and try to represent our country. And I hope that I will tune in as much as possible and show my result,” she said.

The figure skater teenager told the news channel that she is devastated and exhausted, but said the support of people around the world gives her strength.

“When I open Instagram, I see how many good wishes there have been. I even saw that there are billboards saying ‘Kamila, you and I!’ in Moscow,” she continued.

“It’s very nice. In such a difficult time for me, this support is very important to me. Coaches support me, the whole environment supports me … I thought I would be alone,” she added.

The Epoch Times reached out to WADA for comment.