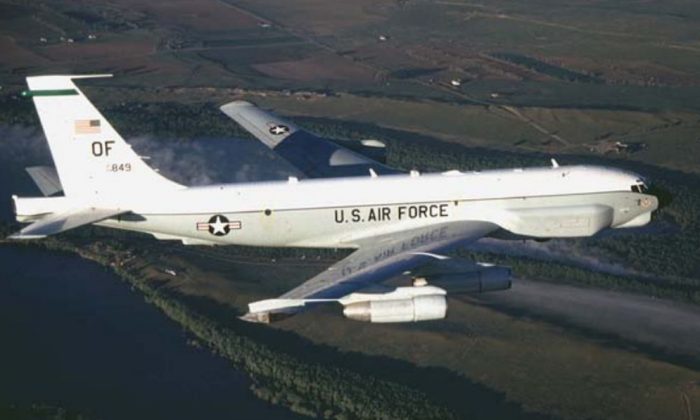 A Russian fighter jet came within 15 feet of a U.S. Air Force plane near the Black Sea, according to Pentagon officials.

U.S. officials said, “On January 25, 2016, a U.S. RC-135U flying a routine route in international airspace over the Black Sea was intercepted by a Russian Su-27 in an unsafe and unprofessional manner. We are looking into this particular incident.”

A Boeing RC-135U is a large electronic intelligence gathering aircraft with two pilots, a navigator, two engineers, and 10 electronic warfare officers at a minimum, as well as several mission specialists. There are only two RC-135U aircraft in the Air Force.

“The United States is raising this incident with Russia in the appropriate diplomatic and official channels,” the Pentagon official added, according to the Washington Free Beacon.

The official said a Russian Su-27 flanker got within a few feet of the RC-135U, which had its transponder on, according to FlightAware.com. A transponder is a device on a plane that emits an identifying signal in response to a received signal.

The fighter came close and its thrust “disturbed the controllability” of the U.S. plane, the official added.

CNN reported that the U.S. official said Russian intercepts happen routinely and most are conducted safely.

Major-General Igor Konashenkov, a spokesperson for the Russian Defense Ministry, said the interception was launched after “Russian air defense radars spotted an unidentified air target over the Baltic Sea making steady progress toward the national border,” RT.com reported. He claimed the plane had its transponder turned off.

“No emergency situation was reported during the fly-by of the American reconnaissance aircraft,” Konashenkov added.

The RC-135U was in the area to monitor Russian military activities in western Russia and Kaliningrad, according to RT.