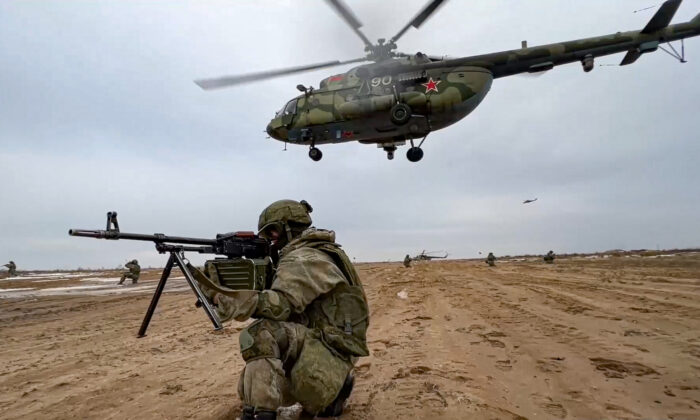 Russian Diplomat: US Intelligence Assessments Not Accurate Due to Past Mistakes

A top Russian diplomat said that intelligence assessments from the United States or the United Kingdom can’t be trusted, due to past mistakes.

“We don’t trust the U.S. and British intelligence, they let us down, the whole world, on many occasions enough to remember weapons of mass destruction in Iraq,” Dmitry Polyanskiy, a deputy ambassador to the United Nations, told Sky News on Feb. 20.

Polyanskiy was referring to the claim by Bush administration officials in the early 2000s that then-Iraqi leader Saddam Hussein possessed weapons of mass destruction, or WMDs, which led to the U.S. invasion of Iraq in 2003. American forces found none, although they did find old stockpiles of chemical weapons.

He also disputed reports claiming there were more than 150,000 Russian soldiers positioned near the Ukrainian border. Polyanskiy, like other Russian officials, said his country is merely carrying out military drills.

However, those military exercises were flagged as concerning by U.S. Secretary of State Antony Blinken during a CNN interview on Feb. 20. After Russian and Belarussian officials announced they would extend joint military exercises, Blinken said the United States was concerned that it may lead to a possible invasion.

“We’ve seen that over the last few days. Now they’re justifying the continuation of exercises—’exercises’ in quotation marks—that they said would end now, the continuation indefinitely of those quote-unquote ‘exercises,’ on the situation in eastern Ukraine, a situation that they created by continuing to ramp up tensions,” he said.

In the interview, Blinken said Russia had increased its troop count to more than 150,000 in recent days, up from fewer than 100,000 several months ago.

“All of this, along with the false flag operations we’ve seen unfold over the weekend, tells us that the playbook that we laid out is moving forward,” Blinken said.

Incidents of shelling across the line dividing Ukrainian government forces and Russian-backed separatists in that region, which were sporadic in the past, increased sharply last week and continued on Feb. 20.

Meanwhile, Russian President Vladimir Putin and his French counterpart, Emmanuel Macron, discussed the need to step up the search for diplomatic solutions to the escalating crisis in eastern Ukraine, in a Feb. 20 phone call, the Kremlin said in a statement.

In the Sky interview, Polyanskiy claimed Putin wanted to meet with Western leaders in the near future to “see what we can do for security and guarantees for Russia’s absolutely legitimate concerns.”

Regarding the military exercises, Belarus didn’t say how long Russian troops, which are estimated by NATO to number 30,000, might remain in the country, which borders Ukraine to the north.

Belarus Defense Minister Viktor Khrenin said the focus of the extended exercises was “to ensure an adequate response and deescalation of military preparations of ill-wishers near our common borders.”