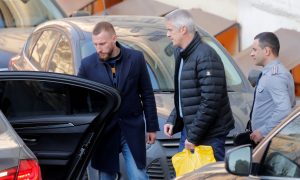 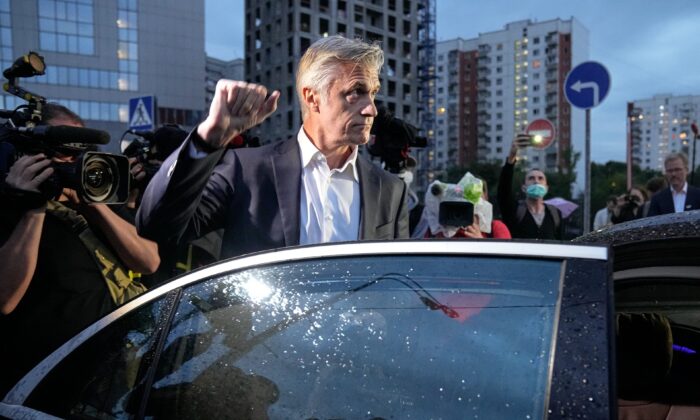 Founder of the Baring Vostok investment fund Michael Calvey speaks to journalists as he leaves a court room after a hearing in Moscow, Russia, on Aug. 5, 2021. (Alexander Zemlianichenko /AP Photo)
Europe

MOSCOW—A court in Moscow convicted a prominent U.S. investor on charges of embezzlement and handed him a suspended sentence on Friday, a verdict he deplored as “deeply unfair.”

Michael Calvey was accused of embezzlement from the Russian bank Vostochny, in which his investment firm Baring Vostok had a controlling stake. He denied any wrongdoing.

“I view the verdict as unfortunate and deeply unfair,” he said after the verdict, adding that he would meet with his lawyers to decide on his next steps over the following week.

The prosecution alleged that Calvey took a loan of 2.5 billion rubles ($37 million at the time) from the bank and that in turn he transferred to the bank his shares in a company called IFTG that he said were worth the amount of the loan, but were actually worth far less.

“The court, unfortunately, didn’t or couldn’t understand the substance of the case, with no victim, no damage, and no beneficiary,” Calvey said after the verdict. “The judge simply repeated—word for word—the text from the prosecutor’s case. There were literally hundreds of pieces of evidence submitted in court proving that my colleagues and I acted entirely legally and in the interests of Vostochny Bank.”

Calvey spent about two months in jail after his arrest in February 2019 before being placed under house arrest and then released last fall.

Calvey’s company was one of the largest foreign investment firms in Russia and his arrest dented investors’ confidence in the country.

During the trial, Calvey told the court that his acquittal could help draw new foreign investors to Russia.

Speaking after the verdict, he said that given the tendency of Russian courts to side with the prosecution, “compared to most cases, receiving a suspended sentence is already almost a victory.”

“But on the other hand, it is simply outrageous to be convicted of a crime that never happened,” Calvey noted. “And the specific conviction on the charge of embezzlement obviously is deeply offensive to me, as a professional in the investment industry with an honest reputation built over 25 years.”