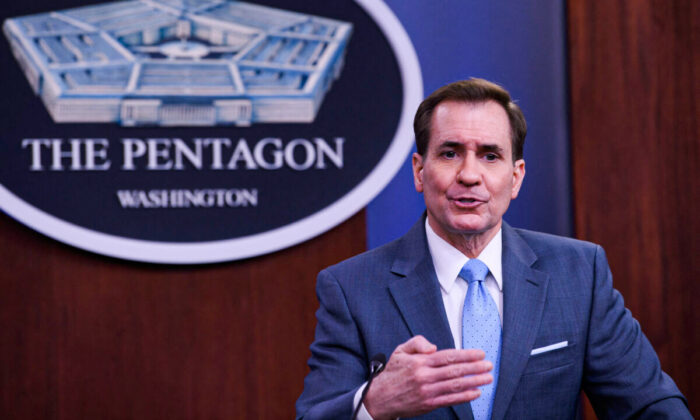 Pentagon spokesman John Kirby speaks during a briefing at the Pentagon in the District of Columbia on Feb. 1, 2022. (Nicholas Kamm/AFP via Getty Images)
Russia-Ukraine War

The convoy, which stretches for as much as 40 miles from near Prybisk in the north to the southern end near the Antonov airport, was moving steadily south at the onset of the war. But last week, progress appeared to all but stop.

“It’s a very, very long convoy. We don’t even know if it’s all, we can’t even say that, that it’s all one convoy and not several. But it does remain as our best assessment as it remains stalled,” Kirby said during a press conference.

The Pentagon believes the convoy purpose for heading to Kyiv is to “resupply,” Kirby said, noting that the Pentagon doesn’t have “perfect visibility” on the convoy.

“When you look at the images from the air, you can see a lot of it but they don’t look like armored vehicles so much as they look like resupply trucks. That’s not to say that there aren’t combat vehicles in there,” he said.

“We don’t have perfect visibility on it. But the assessment is that it was largely meant to help resupply and it is still stalled. It’s still stuck,” Kirby told reporters.

The Pentagon’s press secretary previously said the Russians appear to be regrouping and reassessing the reasons for their slow progress, “and how to make up for lost time.” He said they likely did not anticipate such problems or the extent of Ukrainian resistance.

Kirby told reporters on Monday that morale continues to be a problem for many of the Russian forces, especially in the north and east of Ukraine, 12 days into Russian President Vladimir Putin’s full-scale invasion of Ukraine.

He added that nearly all of Russia’s combat power is now in Ukraine.

The long-range fires are causing more damage to infrastructure and more injuries due to their lack of precision.

“We think it’s because, again, they have not been able to make up for the lost time that they continue to suffer from on the ground,” Kirby said.

Kharkiv, Ukraine’s second largest city, is really “becoming victim” to a lot of these long range fires, he said.

The Pentagon also said it had no reason to discount a report by the Wall Street Journal that Russia is seeking foreign fighters to assist in its invasion of Ukraine.

“We’re in no position to refute the accounts that they might be seeking to recruit Syrian fighters,” he said.

“I can’t begin to speculate why he [Putin] would find it necessary to seek help from foreign fighters,” he added, noting that the Pentagon believes Russian forces are having morale problems, supply problems, fuel problems, and food problems.

“They are meeting a very stiff and determined Ukrainian resistance. And we still maintain that they are several days behind what they probably thought they were going to be in terms of their progress,” said Kirby.

“But I cannot get inside Mr. Putin’s brain as to why he would find it necessary to seek support from foreign fighters.”