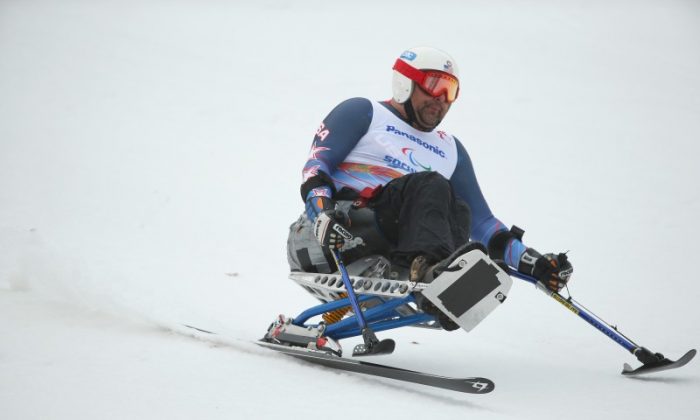 Joe Tompkins of the USA finishes after his run during an official men's sitting skiing training session at Rosa Khutor Alpine Center ahead of the 2014 Winter Paralympics on March 5, 2014 in Sochi, Russia. (Mark Kolbe/Getty Images)
Crisis in Ukraine

The founding fathers of the Paralympics must be turning in their graves. The Sochi Paralympics is the latest in a long list of sporting events to be marred by politics. The 1980 Olympics in the then USSR are best remembered for boycotts by the United States and 64 other teams in protest against the invasion of Afghanistan; the Moscow Paralympics were moved to the Netherlands because, as a Soviet official put it, “we do not have anyone with impairments here”.

So when the new International Paralympic Committee President, Sir Philip Craven, stated this week – in reference to Russia’s de facto military take-over of the Crimea – that he would “leave global politics to the politicians”, this was simply a variant of the tired refrain: “Sport and politics do not mix.”

There are some parallels between the 1980 Olympics and Sochi. David Cameron has ordered a boycott of the Paralympics by British Ministers and Prince Edward, patron of the British Paralympic Association, is staying away.

Far from sport not mixing with politics, it would appear that sports mega-events in particular have become increasingly politicised in recent years, with governments of all political hues, based in a wide range of regime types (from advanced capitalist to dictatorship), falling over themselves to play host. The answer as to why this is the case is not as simple as one would imagine: motives range from “showcasing the nation” to “coming-out parties” to “domestic nation-building”.

Trends suggest that states with historical pasts and international images that need burnishing are flocking to host sports mega-events, especially after the spectacular success of Germany’s 2006 FIFA World Cup (in terms of image improvement). There is an inherent danger to this strategy: hosting is a double-edged sword. Intense media scrutiny is simply one of the by-products of hosting and the longed-for recognition may not be quite what was intended.

Since winning the bid to host the 2022 FIFA World Cup, Qatar has learnt this the hard way by having its treatment of construction and domestic workers examined closely. This could be a case of accidental democratisation: the decision to award Qatar the event was political, made by an undemocratic and unelected organisation. But it might lead to an improvement in conditions for workers in Qatar.

This kind of outcome does not appear to be the case in Russia. Shortly before the Sochi Games, Russia announced its controversial anti-gay laws; shortly after, it mobilised troops in response to the growing crises in the Ukraine, let off warning shots and provocatively tested a ballistic missile amid the tension.

The Sochi Winter Olympics and the 2018 FIFA World Cup are more than just showcasing events for Russia. Hosting the most expensive Olympics of all time (including summer events) is part of the growing confidence of a state which sees itself returning to its former glory after two decades of difficult economic and social transition.

Mega-sporting events can be used as a show of strength by the host to the international community; internally they can aid the process of binding the nation’s citizens around a common cause.

Russia appears to be testing the boundaries of global opinion and the Sochi Olympics and Paralympics has ensured everyone is paying attention. In the run up to the 2018 FIFA World Cup, the showcase event of the world’s most popular sport, it is likely that Russia, as a (re-)emerging state, will once again be at the forefront of debates on the changing face of global power.

Jonathan Grix does not work for, consult to, own shares in or receive funding from any company or organisation that would benefit from this article, and has no relevant affiliations.