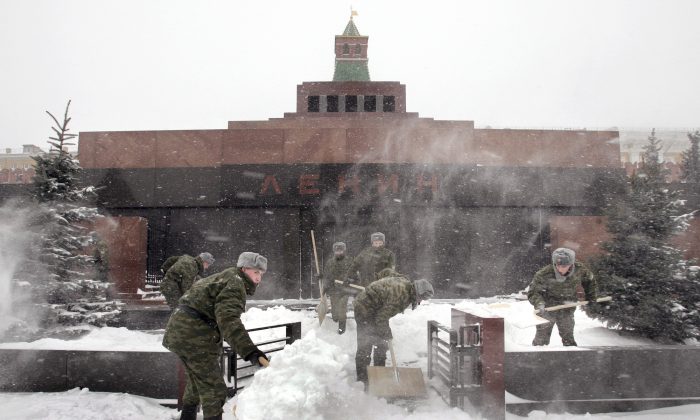 Russian soldiers clear snow from an area in front of former Russian communist leader Vladimir Ilyich Lenin's Mausoleum on Moscow's Red Square on Jan. 28 2005. Nearly a century after Lenin's death, his embalmed body lays in the mausoleum on the Red Square. (YURI KADOBNOV/AFP/Getty Images)
The Dead End of Communism

It’s been nearly 100 years since the 1917 Bolshevik Revolution was carried out, placing a communist regime in power of a nation-state for the first time in human history.

While the first Soviet leader, Vladimir Lenin, only ruled for about seven years until his death in January 1924, his legacy lasted much longer. After his death, Lenin’s body was embalmed before it was placed in a building in Moscow’s Red Square, known now as Lenin’s Mausoleum, or Lenin’s Tomb. The body has been a public fixture ever since.

Now, the Russian Orthodox Church Outside Russia has called for Lenin’s body to be removed from the square.

As many as 10 million people may have died under Lenin’s regime through starvation or persecution. Nobel Prize-winning author Aleksandr Solzhenitsyn, in his 1974 masterpiece “The Gulag Archipelago,” noted that mass Soviet repression began under Lenin and the Bolsheviks—and not with Joseph Stalin. Also, between 1921 and 1922, millions starved to death in the Povolzhye famine, forcing peasants to resort to cannibalism to survive. The Black Book of Communism alleges that Lenin ordered the seizure of food that peasants had grown as a form of political repression.

A Cursed Legacy: The Sad Lives of Stalin’s Children

The orthodox church said Lenin, and all his images throughout Russia, should be removed.

“The liberation of Red Square from the remains of the main tormentor and repressor of the 20th century, as well as the destruction of all monuments dedicated to him, could become one of the symbols of the Russian people’s reconciliation,” the statement reads, according to the state-run Interfax news agency.

The Russian Orthodox Church Outside Russia was formed by priests and religious leaders after 1917 who fled the communist regime and its persecution against all forms of religion.

At one point, Stalin’s embalmed body was placed next to Lenin’s at Red Square, but it was removed in 1961 after then-leader Nikita Khrushchev’s de-Stalinization policies were enacted.