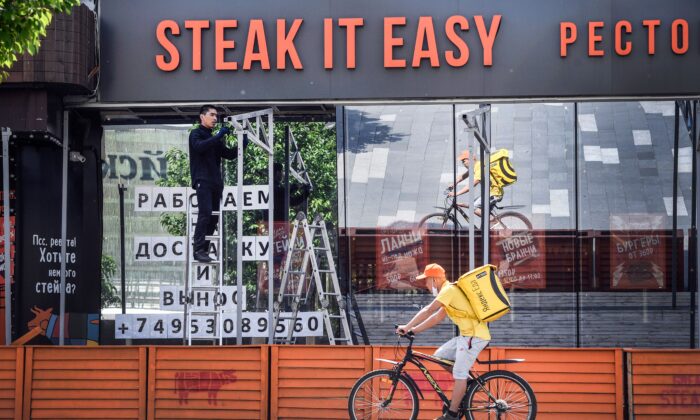 A worker constructs a terrace of a restaurant in central Moscow, Russia, in this file photo taken on June 11, 2020 (Alexander Nemonov/AFP via Getty Images)
Europe

Russian Capital Locks Down Amid Rise in COVID-19 Infections

The Russian capital will be placed under a partial lockdown for the first time since June 2020 as the country reports a rising wave of COVID-19 infections and deaths, authorities announced on Thursday.

During Moscow’s partial lockdown, only shops that sell food, medicine, and other key infrastructure are allowed to operate.

All non-essential services like cinemas, gyms, entertainment venues, and most stores will be closed. Schools and state kindergartens will be shut as well, while restaurants and cafes are only allowed to provide service for takeout or delivery.

Russian President Vladimir Putin has also ordered a non-working period for nine days from Oct. 30 until Nov. 7. During this period, most state organizations and private businesses are to suspend operations.

The announcement comes as Russian authorities reported a record 1,159 deaths from the CCP (Chinese Communist Party) virus, which causes COVID-19, in the past 24 hours. Official data also shows that more than 40,000 new COVID-19 infections were identified nationwide, topping a previous record.

During the country’s non-working period, authorities have not instructed people to stay home and many Russians have decided that now is an ideal time to use the days for a trip to the seaside or elsewhere.

Polina Bondarenko, a travel agent with the company told news agency Reuters that prices had shot up for trips to all available destinations. “People are leaving in connection with this lockdown,” she told the agency.

Mkhissin Rami, a manager at Orange Sun Tour, said the rush had started right after the partial lockdowns were announced last week.

“No one wanted to stay in Moscow, because what can you do here, so demand went up by about five times, for sure,” he said.

The Kremlin has blamed the rise in CCP virus infections and deaths on vaccine hesitancy. As of Oct. 22, official data showed that about 49.1 million Russians were fully vaccinated. The total population, excluding annexed Crimea, is officially estimated at around 144 million.

Many Russians have said they are reluctant to get vaccinated, with people saying they are hesitant due to mistrust of the authorities, while others cite concerns about the safety of vaccines.