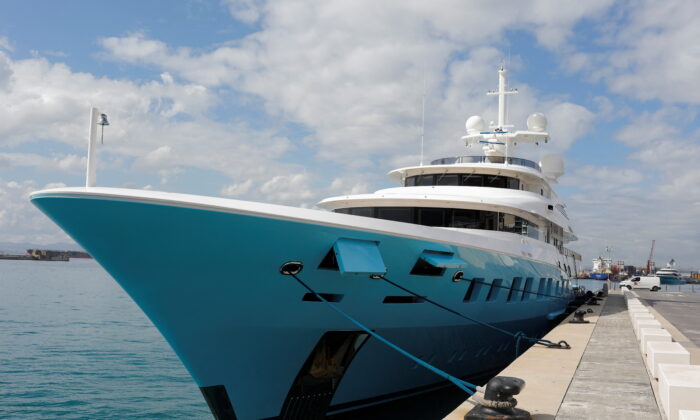 The Axioma superyacht belonging to Russian oligarch Dmitry Pumpyansky, who is on the EU's list of sanctioned Russians, is seen docked at a port in Gibraltar, on March 21, 2022. (Jon Nazca /Reuters)
Russia-Ukraine War

A luxurious superyacht linked to a Russian billionaire currently under British and European Union sanctions has been detained in Gibraltar, a British overseas territory.

The 72-metre long vessel, Axioma, which belongs to Russian oligarch Dmitry Pumpyansky, docked in Gibraltar on March 21 and was subsequently detained by authorities.

Commenting on the seizure, UK Transport Secretary Grant Shapps said on March 22 that he is doing “all I can to cripple Russia’s aviation and shipping industries.”

Pumpyansky is the owner and chairman of steel pipe manufacturer OAO TMK, which has supplied Russia’s state-owned energy company Gazprom since 1998. His net worth is estimated at £1.84 billion ($2.44 billion).

He was sanctioned by the UK last week in response to Russia’s invasion of Ukraine.

Shapps said the British government has deployed “an unprecedented range of sanctions” against Russia as “we cannot stand idly by while [Russian President] Vladimir Putin tramples over a sovereign, democratic country, laying waste to homes and hospitals.”

He said the UK sanctions are “being mirrored in our overseas territories,” which led to the Pumpyansky’s superyacht being seized in Gibraltar.

“As transport secretary, I’m doing all I can to cripple Russia’s aviation and shipping industries, and my message to Putin and his cronies is loud and clear—there is nowhere to hide.”

Western sanctions on Russian oligarchs following the invasion of Ukraine have triggered an exodus of luxury yachts from Europe in recent weeks, with several heading towards the Maldives, which has no extradition treaty with the United States.

On March 21, the Gibraltar government confirmed in a statement that the Axioma had arrived in port after asking permission to enter and “was confirmed to be the subject of an arrest action by a leading international bank in the Supreme Court of Gibraltar.”

It said the vessel was allowed to dock “in the interests of creditors with proper claims against the vessel.”

“The vessel is now subject to arrest by the Admiralty Marshal until further order,” said the statement.

Since the war in Ukraine began, Russian-linked yachts have been stuck in several countries including Italy, Spain, and Germany.

Meanwhile, two superyachts linked to Roman Abramovich, another Russian billionaire under sanctions, have docked in Turkey.

Eclipse, which is one of the world’s biggest yachts at 162.5 metres long, docked in the resort of Marmaris in southwest Turkey on March 22, after another superyacht, Solaris, arrived a day earlier in the resort of Bodrum.

While strongly criticising the invasion, Turkey has said it opposes sanctions imposed by its NATO allies on principle. That could set it up as a possible safe haven for Russians seeking to make investments and preserve assets.