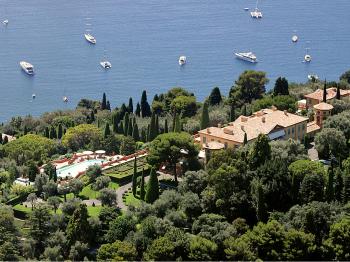 SPRAWLING: Leopolda estate, in Villefranche-sur-Mer, French Riviera, August 2008. The estate was sold to Russian billionaire Mikhail Prokhorov for &#8364 370 million (US$503.6 million), plus &#8364 19.5 million (US$26.5) for the furniture in August 2008 but later the Russian magnate refused to clinch the deal. Originally built by King Leopold II of Belgium at the beginning of 1900, the cream-colored villa is set in 20 acres of gardens overlooking Cap Ferrat, near Villefranche-sur-Mer. (Eric Estrade/AFP/Getty Images)
International

Charlotte Cuthbertson
Senior Reporter
Charlotte Cuthbertson is a senior reporter with The Epoch Times who primarily covers border security and the opioid crisis.
View profile
Follow
biggersmaller
Print
Russian billionaire, Mikhail Prokhorov, has lost a $53 million deposit on the French villa he decided not to purchase. The money was a 10 percent deposit that a French court ruled nonrefundable on Monday.

Prokhorov, a self-made billionaire, and richest man in Russia, came in at number 40 on the 2009 Forbes Rich List. His fortunes halved in the financial crisis but he seemed relatively unfazed.

"What I like for Russia is that we have such extremes, I like this," Prokhorov told the BBC last summer. "Sometimes it's good, sometimes it's not very good. If you can live in these extremes, it's like fresh water all the time."

Prokhorov has close ties to the New York area as he is expected to get approval to buy the New Jersey Nets basketball team next week.