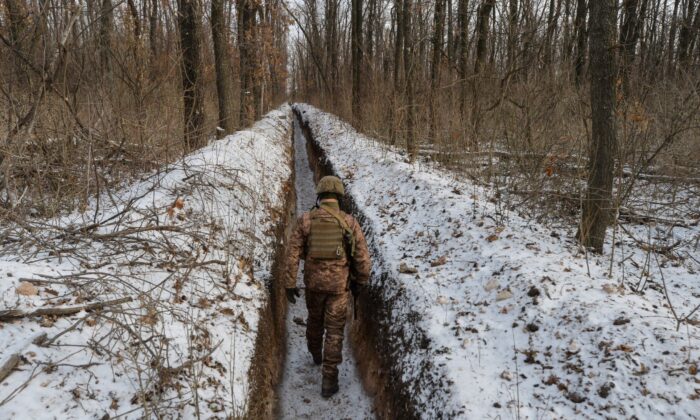 A Ukrainian service member walks along fighting positions on the contact line with Russian-backed separatist rebels near the town of Avdiivka in Donetsk Region, Ukraine, on Feb. 13, 2021. (Oleksandr Klymenko/Reuters)
Markets

Stocks had fallen by 10.5 percent on the MOEX Russia Index on Monday, prior to the market closing and before the subsequent escalations of the conflict. However, this was only the latest in a long slide, which has seen the Russian stock market fall by over 25 percent since its all-time high last October.

While it is impossible to establish absolute causality, this overall decline coincides with two economic trends of the period: a global phase of economic stagnation and an increasing Russian military aggression along the Ukrainian border, which took a major turn toward active conflict on Monday.

Russia is not alone in suffering economic tribulations in recent months, as the global economy has experienced a period of stunted growth since last autumn, as nations around the world have reluctantly begun to take measures to curb inflation after years of lax monetary policy and generous printing of currency. Leading the charge is the United States Federal Reserve, which has signalled its intent to impose numerous rate hikes this year, causing markets to suffer in anticipation of the deflationary economic policy.

However, a more relevant and obvious factor may be the Russian military tensions with Ukraine, which escalated once again last autumn when Putin mobilized the Russian military along the Ukrainian border. Russian forces are already active in the Donbas after entering during the Crimean crisis of 2014.

The current conflict escalated on Monday morning, after Russia claimed it killed five alleged “saboteurs” and destroyed two Ukrainian armored vehicles who allegedly crossed over into Russian borders, according to Russian military sources. At the same time, Russian-backed separatist forces in Donetsk sent out an urgent appeal to the Russian president, urging him to intervene on their behalf in their ongoing conflict with the central Ukrainian government, with Donetsk Peoples’ Militia spokesman Eduard Basurin appealing to Putin for moral and military support in a statement released to Youtube.

By Monday evening, it appeared that Putin had answered this request, with media now reporting that Russian troops have orders to invade these troubled regions of Ukraine as part of what the Kremlin describes as a so-called “peacekeeping” effort in the regions the Kremlin now recognizes as independent. Putin’s announcement is one of the most significant developments of Eastern European geopolitics since Russia’s annexation of Crimea in 2014.

Because the Moscow Exchange ceased trading overnight, the announcement to invade has not yet been reflected in the Russian stock market. Additionally, NATO and the United States have yet to issue a comprehensive response, aside from a set of sanctions prohibiting new investment, trade, and financing in the breakaway regions and a chorus of platitudinous statements of solidarity with Ukraine.

However, western leaders may find their hands tied as they attempt to reprimand Russia for these recent escalations of the Ukrainian conflict. After brief consideration last month, the United States and European Union abandoned the idea of removing Russia from the SWIFT financial payments system, fearing that doing so would destabilize global markets too severely. And while western diplomats have threatened to shut down the Nord Stream natural gas pipelines to punish Russia, doing so would come at an immense cost to Germany, which has become increasingly dependent on Russian gas for winter heat after shuttering its own nuclear program.

With the high costs of imposing severe sanctions against Russia, it may be the case that Putin has outfoxed his western adversaries in this conflict, with it now being a likelihood that the Donbass will be annexed within Russian territory in the near term.

While the Russian stock market has suffered during the current conflict, Putin has measured it an acceptable sacrifice of short-term economic prosperity for long-term geopolitical ambitions in the region. Yet, it remains to be seen whether the Moscow stock exchange will rebound if the situation begins to cool, with the contested territories de facto administrated by the Russian state, or whether Putin will pay the price of his gamble in the form of long-term economic suffering.