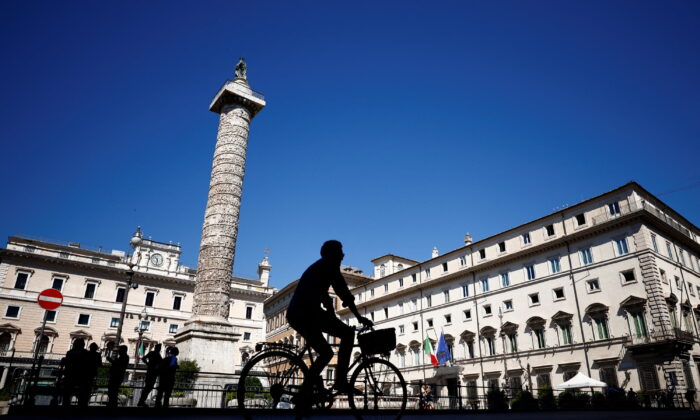 Matteo Salvini, the head of a rising far-right party in Italy, has some big problems. They mirror those in many other countries, where the center-right and far-right are diverging, according to David Broder, an expert on contemporary Italian fascism.

First, Salvini is soft on Russia, which is close to China. An influential Italian veto that leans toward China or Russia in the European Union or NATO, and that buttresses that of Hungary’s Victor Orban and Turkey’s Recep Tayyip Erdogan, could weaken Western defenses against the world’s worst dictators.

We saw the risk, for example, when Turkey threatened to veto Sweden and Finland’s accession to NATO. (Turkey eventually withdrew the objection.)

Second, Salvini’s coalition acted against EU integration and belt-tightening reforms in Italy, just when they could be required for Brussels to release a total of 200 billion euros of COVID-19 recovery funds. Italy needs the money, and the European Union needs the cohesion.

The centrist Mario Draghi government that attempted to push through the necessary tightening came crashing down on July 21 when it failed due to the obstructionism of Salvini’s League (Lega) party, along with Silvio Berlusconi’s center-right Forza Italia.

Both parties were minority partners in Draghi’s centrist government, along with Giuseppe Conte’s populist and anti-establishmentarian Five Star Movement. Draghi himself is center-left.

The Italian press is airing suspicions that the fall of Draghi was engineered by Moscow and supported by Lega and Forza Italia.

The suspicions could be baseless smears from the left. But last month, Russian President Vladimir Putin allegedly brought down another pro-Western government—in Bulgaria.

“We curbed corruption locally but found we had a bigger enemy: Russian influence,” the former Bulgarian prime minister told The Sunday Times of London. “We didn’t understand that corruption and Russian influence in Bulgaria are the same thing. Corruption is Moscow’s best foreign policy instrument in the Balkans.”

According to the left-leaning Project Syndicate, “the Kremlin is known to meddle in Western democratic politics, from interfering in the 2016 Brexit referendum and US presidential election to financing Marine Le Pen’s far-right National Rally in France.”

Could the same thing have happened in Italy?

On Aug. 4, the Italian daily, La Stampa, reported a meeting between Salvini’s Lega and Moscow. Intelligence documents leaked to the paper reportedly claimed that a senior Russian diplomat in Rome pressed Salvini, through a top adviser, about whether Lega would withdraw its support from Draghi’s ruling coalition. That was two months before Salvini followed that strategy, which resulted in the government’s fall.

Salvini has long been friendly toward Putin. He was photographed smiling and making a thumbs-up gesture in Red Square while wearing a t-shirt picturing Putin’s likeness. In 2018, Lega officials visited Moscow to seek funding.

A week after the invasion, Salvini reportedly had dinner with the Russian ambassador. He almost conducted a “peace mission” to Moscow, announced in May. The Russian Embassy in Rome paid for Salvini’s flight to Moscow. This subsidized diplomacy caused public opposition to the trip, and Salvini backed down.

Salvini claims that his meetings with Russians were legitimate attempts to broker peace with Moscow. But he failed to tell his own prime minister about his mission to Moscow in advance. It could have undermined the negotiations of not only Italy, but all of NATO.

Berlusconi’s Forza Italia also reportedly met with a Russian Embassy official recently, including a phone call from Berlusconi himself. Berlusconi has for years had strong personal ties to Putin.

Moscow’s motive to destabilize Draghi’s government is apparent. Draghi is an “Atlanticist” supporter of the U.S.-led NATO alliance while being averse to Russia and China.

After the invasion of Ukraine, Draghi distanced Italy from Russia and strongly supported Ukraine, including militarily, financially, and politically. He encouraged sanctions against Russia and pushed for admitting Ukraine to the European Union.

In a speech shortly before he resigned, Draghi warned that his ministers appeared loyal to his coalition while subverting his policies. He said Italy should increase “efforts to combat interference from Russia and other autocracies in our politics, in our society.”

Lega promoted a taxi strike that put a new competition law in jeopardy. Italy has strained public finances, but the third party within Draghi’s government to oppose him, the Five Star Movement, lobbied for more public spending and social welfare—exactly the opposite of what Brussels wanted.

The three parties who opposed Draghi were the Kremlin’s closest in Italy. They caused chaos and opposed the fiscal reforms that led to Draghi’s resignation.

The Russian and Chinese influence extends back to prior administrations. Since 2016, Beijing has sent approximately 10 Chinese police officers to Italy each year to conduct joint patrols with Italian police in cities like Rome, Milan, Prato, and Venice. The reason for the patrols is ostensibly to protect Chinese tourists.

During the pandemic, then Prime Minister Conte, of the Five Star Movement, invited 100 Russian medical personnel to operate within Italy. Members of the Lega supported it. The Russian assistance, however, turned out to be delivered by soldiers in military vehicles that fanned out across Italy’s Bergamo and Brescia regions.

Unnamed sources told La Stampa that the aid was 80 percent “useless.” But it presented Moscow with a cornucopia of propaganda and intelligence-gathering opportunities. For example, the Russians operated just 30 miles from a U.S. military base.

Moscow called the deployment “From Russia With Love.”

The Lega and Forza Italia are teaming with the far-right Brothers of Italy (Fratelli d’Italia), led by Giorgia Meloni. The latest polls indicate that Fratelli d’Italia, which has its own links to Moscow, has risen to 22.5 percent of votes in the Sept. 25 election—more than any other party.

The opposing left coalition fell apart on Aug. 7, which could mean a landslide for the right and their control of two-thirds of both houses of parliament.

Thus, Meloni has a good chance of forming the ruling coalition and leading the government as Italy’s first female head of state.

The Fratelli d’Italia is a mix of far-right and center politics. Its members tend to support business, conservative family values, and a constitutional amendment that would centralize power in a president rather than the rapidly shifting alliances of Italy’s parliamentary system. Fratelli d’Italia is against high taxes and illegal immigration.

Meloni has described her party as “center-right.” She attempts to appear Atlanticist in her foreign policy—supporting the European Union and NATO, and trying to appear to advocate tough measures against Putin for his war in Ukraine. Meloni has also stood up for Taiwan.

But Federico Fubini, writing in the left’s Project Syndicate, is dubious. Meloni opposed sanctions on Russia in 2018, and “earlier this spring, she argued not just that Italy should receive ‘compensation’ from the EU for the cost of sanctions, but also that the United States should not expect Italy to serve as the ‘workhorse of the West’ by reducing its exports to Russia.”

While none of her policies are explicitly fascist, the center-left media typically accentuates Fratelli’s fascist trappings and roots, which they call “neo-fascist.”

According to the Financial Times, “Although established only a decade ago, Brothers of Italy is a descendent of the Italian Social Movement, the neo-fascist party founded after the second world war by associates of Benito Mussolini.”

Broder, writing in The New York Times about the Brothers of Italy, noted that a recent documentary includes “allegations of money laundering, illicit campaign financing and ties to neo-Nazis in the party’s organization in Milan. The film exposed the close collaboration of the leader of Brothers of Italy’s group in the European Parliament with Roberto Jonghi Lavarini, a neo-fascist militant known as the ‘black baron.'”

The party reportedly describes itself as “post-fascist” and uses some symbolism of Mussolini’s defeated lieutenants. In a country where fascism is illegal, Meloni refused to condemn Mussolini. She maintains friendly relations with Orban and Spain’s far-right party, Vox. The latter is campaigning against bans on Franco-era symbols, against federalism, and for a return “to the centralist form of government that existed during the dictatorship.”

In Italy, the drift toward fascist symbology and links to Moscow are making some uncomfortable with the far right.

Former Miss Italy contestant Mara Carfagna, who was an Italian cabinet minister under Draghi and prominent face of Forza Italia, resigned from her party and joined the centrist Azione party. She said she wanted to be certain “of being in a party where no one will dream of plotting with Russia or China to the detriment of the current government.”

Carfagna believes that geopolitics is behind the fall of Draghi. One issue that makes the left unpopular is the rise of illegal immigration.

Reportedly, Russian mercenaries allied with a Libyan general to encourage illegal immigration to Italy under the veil of political asylum. Since the far-right parties in Italy are both pro-Putin and anti-migrant, Putin could increase his support in Italy by encouraging illegal immigration, according to The Telegraph.

According to Project Syndicate, “Belarus deployed the same strategy against Poland and Lithuania last year, almost certainly with Putin’s acquiescence.”

Two of Italy’s former prime ministers have called for an urgent probe into Salvini’s ties to Russia. The intelligence committee of the Italian parliament would be the optimal place for an investigation. But officials on the right, who would likely serve in the next government, have already indicated that they would not investigate.

So Brussels should go ahead with its own investigation. No party is above the law when it comes to foreign influence.

The European Union’s Special Committee on Foreign Interference is supposed to ensure the integrity of elections. Now is the time to put that principle into action. Democracy is only democratic when elections are free of foreign influence and reliably reflect the will of the people.