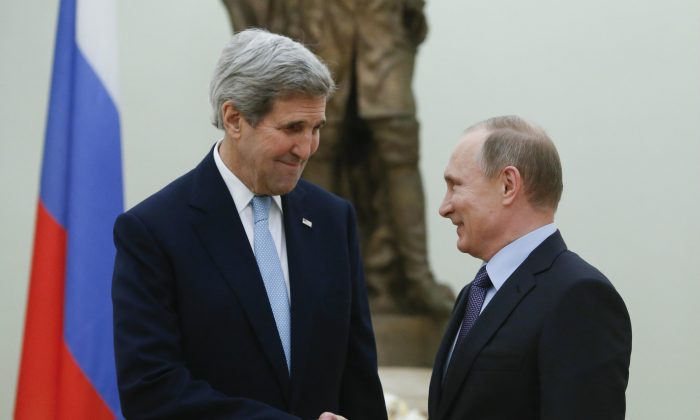 Russian President Vladimir Putin (R) and U.S. Secretary of State John Kerry at a meeting in the Kremlin in Moscow, Russia, on Dec. 15, 2015. The United States and Russia need to find common ground to end Syria's civil war and restore stability in eastern Ukraine, Kerry said Tuesday, as he met with President Putin to try to narrow gaps in the countries' approaches to the crises. (Sergei Karpukhin/AP)
Middle East

BEIRUT—Weeks of Russian airstrikes in Syria appear to have restored enough momentum to the government side to convince President Bashar Assad’s foes and the world community that even if he doesn’t win the war he cannot quickly be removed by force.

That realization, combined with the growing sense that the world’s No. 1 priority is the destruction of the Islamic State (ISIS), has led many to acknowledge that however unpalatable his conduct of the war, Assad will have to be tolerated for at least some time further.

The most dramatic sign of that came Tuesday with the statement by U.S. Secretary of State John Kerry that Assad’s future will be determined by the Syrian people, suggesting in the clearest way yet that he can stay on for now and be part of a transition.

That statement—less a reversal than the culmination of a rethink that had been underway for months—was doubly piquant coming in Moscow, where Kerry was discussing the Syria question with Russian officials.

“The Russians with their military intervention have basically said you can refuse to talk to Bashar Assad, but that means that you won’t get a political solution,” said Yezid Sayigh, a senior associate at the Carnegie Middle East Center in Beirut. “If you do want that, then you have to deal with this man.”

Still, significant gaps remain between the U.S. and Russia on Assad’s future, U.S. Ambassador to the United Nations Samantha Power said Wednesday, emphasizing that the U.S. position on Assad has not changed. “There is going to have to be a political transition, and Assad will have to go,” Power told reporters ahead of a major international conference on Syria in New York on Friday.

Russia, a key backer of Assad, began a campaign of airstrikes in Syria on Sept. 30 at a critical juncture in the civil war, when Assad’s forces were fast losing ground to the rebels around areas considered key to the government’s survival.

While Moscow says its airstrikes target ISIS and other “terrorists” in Syria, much of the Russian air campaign has focused on more moderate forces fighting Assad in the country’s central and northern region where ISIS has little or no presence.

The results have been slow in coming. Despite nearly 11 weeks of crushing Russian airstrikes, government troops aided by Lebanese Hezbollah and Iranian allied forces have failed to reverse losses in the northern province of Idlib and in Palmyra, the ancient desert town in central Syria that fell to ISIS over the summer.

The Russian airstrikes, however, have helped Assad slow or halt rebel advances on several fronts—and he has captured dozens of villages in northern and western Syria.

The government’s biggest victory so far was last month’s lifting of a three-year siege on the military air base of Kweiras by extremist groups in the northern province of Aleppo.

That was followed Monday by Syrian troops’ capture of a sprawling military air base near Damascus that had been held by rebels for the past three years, bolstering the government’s presence in an area overwhelmingly controlled by opposition forces.

And on Wednesday, government forces captured a strategic mountain in the northwest, inching closer to a rebel-held stronghold in the coastal province of Latakia. Capturing the mountains of Latakia would reduce threats to the coast and open the way for government forces to advance toward Salma, another opposition bastion.

While it falls short of a strategic shift, the Russian intervention seems to have restored a battlefield stalemate that existed before rebels made a series of startling gains earlier this year that jolted Assad and his Russian allies into action.

The Russian life-line has energized Assad, who in May acknowledged in a rare public appearance that severe battlefield losses had forced his troops to relinquish large areas in the country’s north.

In the past month, Assad has given a series of interviews in which he defiantly indicated he might run again in new elections and more recently said he will not negotiate with the armed opposition.

“Russia has claimed it intervened in Syria to help forge a political solution to the crisis. However, Russia has only brought about more bloodshed and destruction and made Assad more intransigent,” said Mohammed Yahya Maktabi, an official with the Syrian National Coalition, the main opposition group in exile.

Speaking in Moscow on Tuesday, Kerry said the U.S. and its partners “are not seeking so-called regime change” and said the focus now is on facilitating a peace process in which “Syrians will be making decisions for the future of Syria.”

“How can there be elections if this man is still in power? In 50 years, there was not a (free) election,” said Abu al-Hassan Marea, an opposition activist who now resides in Turkey near the Syrian border.

Aron Lund, a Syria expert, said the Russian intervention raised the stakes and helped give momentum to talks by 17 nations in Vienna last month that included Iran at the table for the first time.

A peace plan they agreed to said nothing about Assad’s future, but stated that “free and fair elections” would be held within 18 months after Assad’s representatives and opposition figures begin talks on a new constitution.

The plan itself seems shaky and vulnerable to manipulation, potentially allowing Assad to hold another bogus election.

Still, it reflects that Washington and Moscow now realize they must work together for an end to the conflict and have basically agreed to defer the question of Assad staying or going in favor of getting a process rolling.

“They still seem to have fundamentally different preferences for the outcome,” said Lund, editor of Syria in Crisis, a website published by the Carnegie Endowment for International Peace.

“The fact that Americans and Russians view each other as indispensable to a solution does not mean that the political gap between them has narrowed much, or that a deal can be implemented on the ground where there is extreme polarization and total mayhem, with too many armed groups for anyone to keep track of,” Lund said.