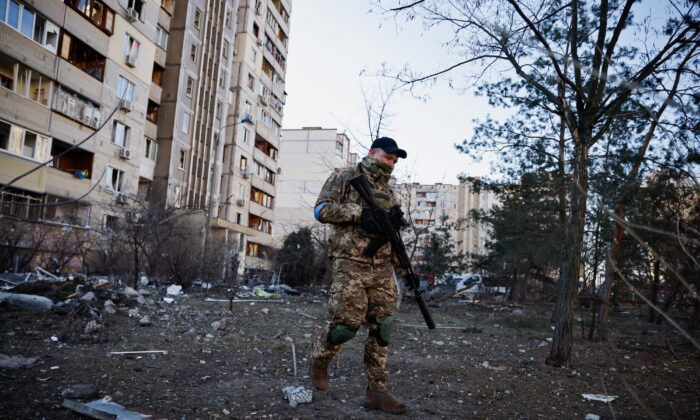 A member of the Ukrainian military surveys an area next to a residential building that was hit by an intercepted missile, in Kyiv, Ukraine, on March 17, 2022. (Thomas Peter/Reuters)
Russia-Ukraine War

As the war in Ukraine enters its fourth week, British intelligence says Russian forces are mostly bogged down on all fronts amid what it described as a “staunch and well-coordinated” Ukrainian resistance.

“Russian forces have made minimal progress on land, sea, or air in recent days and they continue to suffer heavy losses,” British intelligence said in a March 17 update.

Heavily outnumbered Ukrainian forces have prevented Russian troops from capturing any of Ukraine’s biggest cities so far despite the largest assault on a European state since World War II.

More than 3 million Ukrainians have fled the country, and thousands of civilians and military service members have been killed amid the fighting.

Mariupol has been the scene of the worst humanitarian catastrophe, with hundreds of thousands of civilians trapped in their basements with no food, water, or power. Russian forces agreed on March 14 to allow for a humanitarian corridor out of the besieged port city, with Sky News reporting that some 20,000 people have now managed to flee.

Some of the suburbs of Kyiv have been reduced to rubble by heavy fighting, although the capital itself has held firm.

The prime ministers of Poland, the Czech Republic, and Slovenia traveled to Kyiv on March 15, braving a risky train trip through a war zone to demonstrate their support for Ukraine.

Polish Prime Minister Mateusz Morawiecki described the struggle as one between freedom and tyranny.

It is here, in war-torn Kyiv, that history is being made. It is here, that freedom fights against the world of tyranny. It is here that the future of us all hangs in the balance. EU supports UA, which can count on the help of its friends – we brought this message to Kyiv today. pic.twitter.com/Us7k9xTq5f

Retired Polish Gen. Waldemar Skrzypczak, former commander of the country’s land forces, told Polskie Radio 24 in a recent interview that, in his assessment, the ferocity of the initial clashes has mostly given way to positional warfare, limited largely to Russian artillery and rocket fire, with much of it directed at civilian infrastructure.

Skrzypczak said both sides have ceased major maneuvers and have mostly dug in defensively, with troop-on-troop combat mostly confined to small-scale, localized offensives and counter-attacks.

“There’s now a race on for which side can gain an advantage” by mobilizing their respective reserves and “launching counter-offensives or large-scale assaults against opposing forces,” he said.

The retired general added that he believes Russian troops have been heavily battered by three weeks of combat against Ukrainian forces.

“Russian forces are tired and spent from this fight. It makes no difference whether they’re being resupplied with ammunition or not, 20 days of combat is a huge effort for soldiers to undertake and absorbs a lot of energy,” Skrzypczak said.

British intelligence assessed on March 16 that Russia’s lack of significant progress in its advance was likely leading to “the use of older, less precise weapons, which are less militarily effective and more likely to result in civilian casualties.”

“Latest U.N. reporting indicates that 1,900 civilian casualties, including 726 deaths, have already occurred in the conflict to date. The true casualty figure is likely to be significantly greater and will continue to rise as long as the conflict continues,” British intelligence said.

Both sides have said there’s been progress in peace talks.

Ukrainian officials have said they think Russia is running out of troops to keep fighting and could soon come to terms with its failure to topple the Ukrainian government. Moscow has said an agreement is close on an arrangement that would keep Ukraine neutral, a key demand by Russia, which fears Kyiv’s ambitions to join NATO.

NATO chief Jens Stoltenberg told reporters at a press conference in Brussels on March 16 that it’s up to Ukraine as a sovereign nation to decide if it aspires to membership in the alliance. He reiterated NATO’s earlier pledge that no alliance troops would engage in the conflict, but said the organization would continue to support Ukraine by providing military aid.

“We support Ukraine because we know what they can achieve on the negotiating table is of course very closely linked to the situation on the battlefield,” Stoltenberg said.