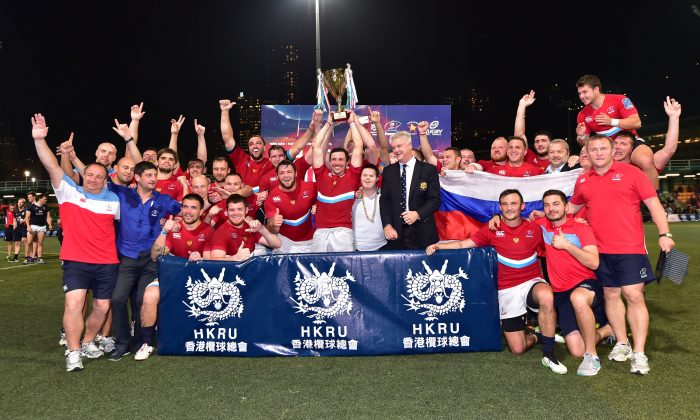 Hong Kong—Russia retained the Ustinov Cup and won the inaugural Cup of Nations, with a dominant win over Hong Kong, 31-12 at the Hong Kong Football Club Saturday afternoon Nov 22, 2015.

It was a tight first half, with Russia going into the break narrowly ahead 11-9. In the second half, with their more expansive play and better tactical kicking, saw them ease to a comfortable and deserved victory.

Hong Kong was first to score. Early pressure from the hosts led to a successful penalty from Hong Kong fly-half Ben Rimene that gave a Hong Kong a 3-0 lead after only 3minutes. Hong Kong’s initial dominance was short-lived. Russia immediately responded with a try, to give warning of their ample skill, not just forward muscle and brawn, by moving the ball deftly along the line, stretching the Hong Kong defense, and scoring in the corner through centre Igor Galinovsky. The conversion was missed, and Russia led 5-3.

Hong Kong clawed back two penalties, towards half-time, once they sensibly started to trust Rimene’s boot instead of wastefully running at the resolute defensive Russian brickwall.

At half time the score line was 11-9 to Russia. The physicality of the Russian team gave the visitors the edge, but Hong Kong had shown speed and spark with counter attack play, and had been dangerous enough to have one try disallowed.

The second half was all Russia. A savvy change of tactics: less muscle more movement, combined with sharper tactical kicking, altered the balance of the game. With their dominance of possession they were able to pin Hong Kong back defensively. They worked two tries in the second half. The first after 8minutes, from a physical forward drive, which put fullback Vasily Artemyev, over the line. The second much later, after 34minutes, for substitute Anton Sychev to score. In between, Sergey Yanyushkin, deftly scored a drop goal, after Russia had decided they’d spent too long trying to the cross the line. One penalty from Ben Rimene was all Hong Kong could muster in the second half, and the final whistle gave Russia sweet victory, 31-12?, the silverware and happy trip back to Moscow.

Both teams had improved since they last met. Russia quicker, more physical and moving the ball at pace: Hong Kong, defensively impressive, quick counter attacks, and ?a disciplined game plan. The tactical playmaking skill of Russia gave them the edge: they dominated possession and territory, and starved Hong Kong of ball. The Russian set piece was also critical: strong in the scrum, but imperious at the lineout. They won their own ball, disrupted Hong Kong, and never allowed Hong Kong to enjoy extended phases of play. No matter how hard Hong Kong contested for the ball, they could not retain nor recycle it for long enough to cause Russia any problems.

In the earlier game, Portugal beat Zimbabwe 36-11. Discipline beat speed: Portugal ran in five tries to one, and enjoyed a comfortable victory in an entertaining match.

The Hong Kong Rugby Football Union is to be congratulated for organizing and hosting the Cup of Nations, and have four solid sides play quality test rugby. Let’s hope this becomes an annual event for Asia, and helps build momentum to the World Cup in 2019, when hopefully two places for Asian teams will be available.