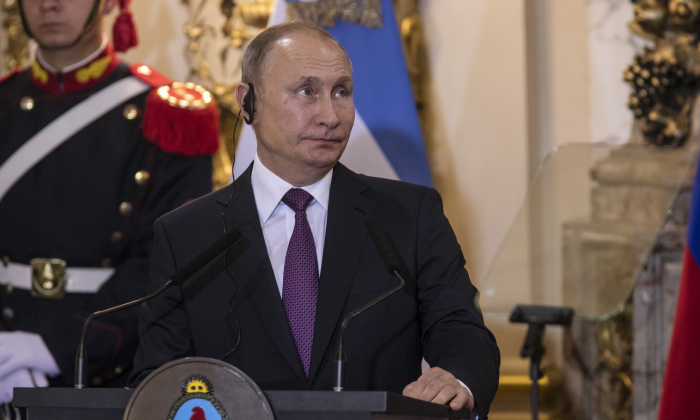 Russian President Vladimir Putin gestures after a meeting between the presidents of Argentina and Russian Federation as part of Argentina G20 Leaders' Summit 2018 at Casa Rosada in Buenos Aires, Argentina, on Dec. 01, 2018. (Ricardo Ceppi/Getty Images)
International

Russian President Vladimir Putin said on Dec. 5 that Moscow will respond to Washington’s exit from the Intermediate-Range Nuclear Forces Treaty (INF) by building missiles currently banned by the pact.

Putin’s televised remarks were a response to an ultimatum delivered Dec. 4 by Secretary of State Mike Pompeo, who said the United States will begin the formal withdrawal process from the treaty in 60 days unless Russia takes steps to comply with the treaty.

The United States has accused Russia of violating the treaty since the mid-2000s. Russia denies being in violation.

The Russian president accused the United States of using the violations as a pretext to exit the 1987 arms treaty, which bans the production, possession, and testing of short- and mid-range ground-launched missile systems.

Putin pointed out that other countries are in possession of missiles that the United States and Russia chose to abandon under the treaty.

“Now it seems our American partners believe that the situation has changed so much that the United States must also have such a weapon. What’s our response? It’s simple: in that case, we will also do this,” Putin said.

President Donald Trump announced his intention to withdraw from the treaty on Oct. 20. At the time, Putin said that if the United States commences deploying missile systems in allied territories in Europe, Russia would respond by targeting those European nations.

In tandem with Pompeo’s ultimatum, NATO released a statement on Dec. 4 holding Russia in material breach of the INF. Pompeo told reporters the same day that European allies lobbied the United States for the 60-day window, during which they plan to mount an intense diplomatic campaign to bring Russia to compliance.

China, Iran, and North Korea possess missile systems which are barred under the INF. China, in particular, has deployed a substantial number of these weapons, forcing both Washington and Moscow to consider a new strategic reality.

“This is a Cold War bilateral ballistic missile-related treaty in a multipolar ballistic missile world,” national security adviser John Bolton said in Moscow on Oct. 23. “This is something that concerns the Russians very substantially, and we talked about that.”

Beijing has deployed at least eight unique operational nuclear-capable missile systems with effective ranges between 300 and 3,400 miles, which are prohibited under the INF, according to the Center for Strategic and International Studies.

Most of China’s long-range arsenal consists of mid-range missiles noncompliant with the INF. Beijing can produce these weapons cheaply and use them to threaten U.S. bases and allies in the Western Pacific, according to Ian Williams, the associate director of the Missile Defense Project at the Center for Strategic and International Studies.

“U.S. strike capabilities must be delivered with expensive ships and aircraft, limiting the quantity and promptness of U.S. firepower that U.S. military can bring to bear early in a conflict,” Williams wrote in an analysis supporting America’s exit from the INF.

The United States attempted to bring China into the INF on at least three occasions. Each attempt has failed.