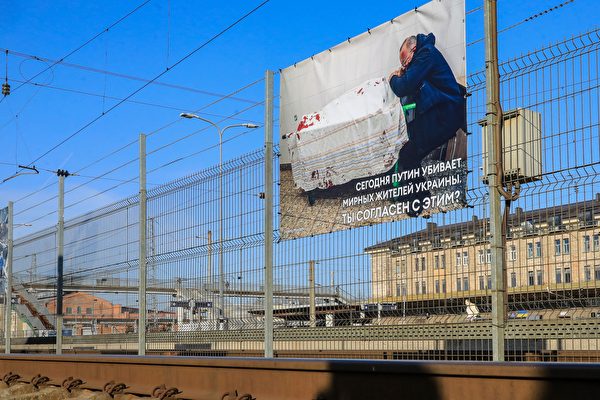 The railway station in Vilnius, Lithuania on March 25, 2022. Transit trains from Moscow to Kaliningrad stop over here. The banner in the picture shows a Ukrainian father crying next to his son's body. (Petras Malukas/AFP via Getty Images）
Russia-Ukraine War

The Russian Foreign Ministry demanded Lithuania lift a partial blockade of Kaliningrad, the Russian region located near the Baltic Sea, and warned that such an action is “openly hostile.”

Kaliningrad, formerly known as Konigsberg, is located between NATO members Poland and Lithuania, although it has been Russian territory for the past 70 years or so.

Last week, Lithuania announced that it was banning the rail transit of goods and supplies to Kaliningrad that are subject to European Union sanctions. That includes coal, construction materials, metals, and advanced technology.

On Monday, the Russian Foreign Ministry described the blockade as “provocative measures” and warned that the Kremlin might take action to protect its interests.

“If in the near future cargo transit between the Kaliningrad region and the rest of the territory of the Russian Federation through Lithuania is not restored in full, then Russia reserves the right to take actions to protect its national interests,” the ministry’s statement said.

The ministry said it summoned a Lithuanian diplomatic official to Moscow to protest the Baltic country’s recent measures. The blockade, it said, violates a 2002 Russia–EU agreement.

“The situation is more than serious and it requires a very deep analysis before formulating any measures and decisions,” Kremlin spokesman Dmitry Peskov told reporters earlier on Monday, according to reports.

Details of the blockade came on June 17 through a video posted by the Russian region’s governor, Anton Alikhanov. He told residents not to panic buy and said two ships were on the way to transport goods to Kaliningrad, according to Reuters.

“Our ferries will handle all the cargo,” Alikhanov said Saturday.

Lithuania said it was merely implementing EU sanctions, part of a swathe of measures intended to punish President Vladimir Putin for the invasion of Ukraine.

The sanctions and Kaliningrad blockade come as the Russia–Ukraine conflict continues to rage, namely in the eastern part of Ukraine. The EU, United States, and several other Western nations have issued harsh sanctions against Russia since the start of the Feb. 24 conflict, including a U.S. ban on all Russian oil.

Ukraine’s Deputy Defense Minister Hanna Maliar announced on Monday that “the struggle is very difficult” in the Donbass region of Luhansk, saying that it’s “extremely difficult” to make predictions.