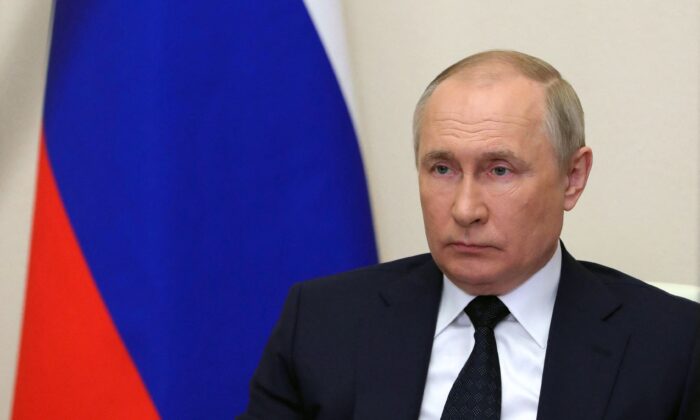 Russian President Vladimir Putin chairs a government meeting via a video link at the Novo-Ogaryovo state residence outside Moscow on March 23, 2022. Putin has demanded that European nations to pay for their natural gas purchases from Russia in rubles. (Mikhail Klimentyev/Sputnik/AFP via Getty Images)
Thinking About China

Even the Ukraine war can't internationalize the Chinese currency

The West has rejected Russian President Vladimir Putin’s demand that gas payments be made in rubles. China is offering the yuan, but prospects are dim.

Typically, 58 percent of Gazprom’s gross gas sales abroad were in euros and 39 percent were in U.S. dollars, with close to zero percent in yuan. Moscow requiring to be paid in rubles is an unprecedented attempt to buoy a failing currency and rescue the Russian economy.

At the same time, Putin decreed that outgoing payments for trade and debt service to “unfriendly nations” would have to be approved by the government. The Kremlin instructed corporations to open a special ruble account with a Russian bank and then transfer the amount of rubles owed equal to the dollar-denominated debt at the daily rate. On Feb. 28, to prop up the ruble, the government ordered exporters to exchange 80 percent of their foreign currency into rubles.

Meanwhile, China is waiting in the wings to “help” Russia by expanding the use of the yuan as an international currency used for oil and gas purchases.

However, the United States and Europe are refusing to use rubles and aren’t even considering using the yuan while coordinating efforts to decrease dependence on Russian energy, leaving Putin and Chinese leader Xi Jinping with no leverage to remake the global financial system according to their edicts.

On March 15, the Russian government stated that it would make its upcoming foreign debt service payments in dollars, but it may be making future payments in yuan if needed. Russian Finance Minister Anton Siluanov said on March 14 that in order to stave off default, the country may dip into its yuan currency reserves.

Russia has about $640 billion in total reserves, roughly 64 percent held in New York, London, Berlin, Tokyo, and other Western countries. This money has been frozen since banks in Western nations agreed on Feb. 28 to sever the Russian central bank’s access to its reserves held overseas.

Chinese banks, by contrast, haven’t joined the sanctions, meaning that Russia’s gold and yuan reserves held there are still available to Moscow. China is the single-largest foreign holder of Russian foreign currency reserves, with 13.8 percent of the country’s total reserves. The yuan accounts for 13.1 percent, and gold makes up another 21.7 percent.

China could possibly act as an intermediary, allowing Russia to use its Chinese-held foreign reserves to trade with the world. But this solution may not be as simple as it seems.

As part of the sanctions, most Russian banks are blocked from SWIFT, the system used for international payments and trade settlements. Moscow and Beijing have discussed several possible workarounds, such as using cryptocurrency, bitcoin, or the digital yuan. Still, they simply lack the liquidity and the volume to support the entire economy. Moreover, the ruble is depressed, and most crypto exchanges won’t accept large amounts of rubles, so even purchasing crypto would be problematic.

This leaves Russia with the option of using the yuan and trading through China’s Cross-Border Interbank Payment System (CIPS), a SWIFT alternative. CIPS, however, is very small compared to SWIFT, with just 75 direct participating banks, most of which are Chinese lenders. Additionally, it can only handle transactions in yuan.

This makes Russia dependent on the small amount of yuan it has in foreign currency reserves. Russia would need to exchange rubles to increase its yuan holdings, which can be complicated. Furthermore, China’s capital controls will prevent large quantities of yuan from leaving the country.

The People’s Bank of China has approved CIPS for Russian banks, and a currency-swap system has been in the works for some time. But it remains to be seen how far Beijing will go and if the Chinese Communist Party (CCP) is willing to risk secondary sanctions by enabling Russia.

While China could derive some strategic benefit from supporting Russia, Beijing’s decisions are generally driven by a desire for profit. For this reason, Chinese banks have already begun restricting dollar-denominated financing for Russian imports.

On Feb. 25, Bloomberg reported that the Industrial and Commercial Bank of China’s offshore units have completely stopped issuing U.S. dollar-denominated letters of credit for Russian commodities, while yuan-denominated letters may be available with special permission.

As Western banks shy away from making a market for the ruble, liquidity is drying up. The yuan hit a record high against the ruble on March 7, prompting some Chinese banks to suspend ruble trading.

From March 11, the China Foreign Exchange Trade System doubled the yuan trading band for the ruble from 5 percent to 10 percent. In layman’s terms, this means the ruble’s value has become so erratic that foreign banks are less willing to trade or invest in it.

As buyers and sellers decline, it becomes harder to trade rubles, driving down the price. Beijing may want to help Moscow, but the CCP is reluctant to order China’s banks to make potentially disastrous financial decisions on behalf of the ruble.

Between March 23 and March 31, because of Putin’s demand for ruble payments, gas prices surged by roughly 30 percent, and the ruble increased by 7 percent. This rally was predicated on the speculation that European countries would comply. So far, however, it doesn’t seem very likely that they will.

Germany stated on March 23 that requiring gas payments to be made in rubles violated contracts. The same day, German Chancellor Olaf Scholz said Berlin was accelerating efforts to end its energy dependence on Russia. By March 25, the ruble began to drop again. Italy vowed to continue to pay in euros.

On March 28, the Group of Seven agreed to reject Moscow’s demands that natural gas from the country be paid for in rubles. Germany and Austria have begun to prepare for the possibility that Russia will shut off Europe’s gas. France has asked citizens to reduce fuel use. The EU plans to reduce Russian gas imports by two-thirds by the end of this year and phase them out entirely by 2030.

On March 29, Poland Prime Minister Mateusz Morawiecki announced that Poland would be canceling all Russian coal imports and that he’s determined to end Russian oil dependence by the end of the year. He urged Europe to do the same, as the purchases are funding Russia’s invasion of Ukraine.

Europe will be able to replace much of the Russian oil it uses with imports from Qatar, the United States, and Norway. At the same time, a new Baltic pipeline carrying gas from Norway should be operational by the end of the year. Poland is also considering importing gas from Kazakhstan. Germany has made arrangements with other suppliers to deliver and pump gas from neighboring countries. Germany’s goal is to stop using Russian coal entirely by the end of the year and Russian gas by 2024.

As the prospect of using rubles for gas sales to Europe to save the Russian economy diminishes, China has offered several yuan-based options to Russia as workarounds for the sanctions, including using yuan to settle energy purchases. As of April 1, at least one Russian oil company, Paramount Energy & Commodities, has agreed to accept payment in yuan.

Nowhere is the U.S. dollar’s dominance more apparent than in the global oil industry. Oil is priced in petrodollars, and 80 percent of international oil transactions are denominated in dollars. Consequently, one of the many reasons central banks hold large quantities of U.S. dollars is to pay for oil.

If China could convince countries to trade in yuan, they would have to keep it as a reserve currency. This would encourage them to invest in China’s government debt and purchase more Chinese imports, internationalizing the yuan and strengthening the Chinese economy.

This would hamper the United States’ ability to issue dollar debt to finance its economic expansion and receive dollars back from exports to cover its liabilities. A decrease in this constant flow of dollars back to the United States would weaken the U.S. economy, which would drive investment dollars out of the country, causing a vicious cycle with dollars losing their appeal.

On March 24, the price of oil dropped by 7 percent as a result of expectations of depressed demand by China due to the lockdowns in Shanghai, Shenzhen, and other large cities. Weaker demand in China leaves Beijing with less power over Russia or international energy markets. Lower oil prices also leave Putin in a less negotiating position with the EU. If he insists on ruble transactions, the EU is more likely to walk away if oil can be purchased at a discount from other suppliers.

Saudi Arabia has nothing to gain by switching to the yuan. Its currency is pegged to the dollar, and its foreign currency reserves are composed mainly of U.S. Treasury notes, as are China’s. Any damage to the dollar would also hurt the Saudi riyal.

China’s dreams of the yuan displacing the U.S. dollar as the petro currency seem extremely farfetched. At most, the Ukraine crisis may slightly increase the use of the yuan in trade between China and Russia, but no other countries will be participating.