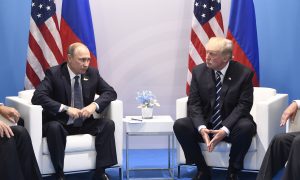 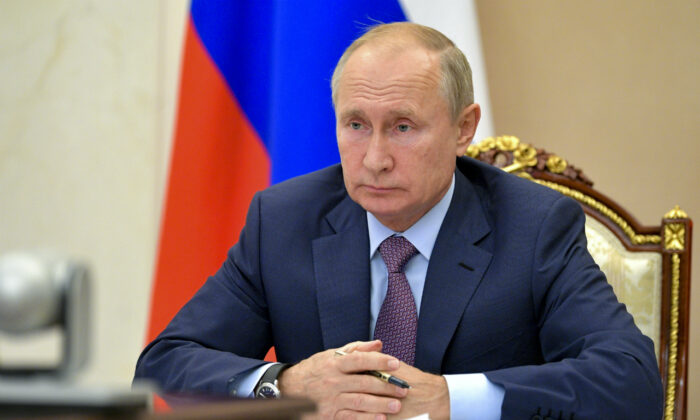 Russia, US Appear Closer on Deal to Extend Nuclear Pact

The last U.S.–Russia strategic nuclear arms control pact appeared on track to win a one-year extension, as Washington on Oct. 20 welcomed a proposal by Moscow for such an extension if both sides freeze all nuclear warhead deployments for that period and the agreement is verifiable.

The apparent breakthrough, coming after months of difficult talks, appeared to narrow the gap between the sides over the fate of the 2010 New START agreement, which is due to expire in February 2021.

The Russian Foreign Ministry said in a statement that Russia proposes to extend the New START treaty for a year and is ready, together with the United States, to make a commitment “to freeze the existing arsenals of nuclear warheads” held by both parties during this period.

However the Russian proposal can only be implemented if the United States “will not advance any additional conditions with regard to freezing the arsenals,” the statement said.

During the extension period, both parties can “hold comprehensive bilateral talks on the future of nuclear missile control, with the mandatory discussion of all factors that can influence strategic stability,” the statement said.

The demise of the treaty would lift all remaining restraints on deployments of strategic nuclear warheads and the missiles and bombers that carry them, making possible an arms race between the world’s largest nuclear weapons powers.

But a statement published by the Russian Foreign Ministry on Oct. 20 suggested that the two countries’ positions had moved closer.

State Department spokesperson Morgan Ortagus, who welcomed the Russian offer, said in a statement that the United States appreciated “willingness to make progress on the issue of nuclear arms control.”

“The United States is prepared to meet immediately to finalize a verifiable agreement. We expect Russia to empower its diplomats to do the same,” Ortagus said.

Her statement highlighted a question the sides would have to resolve to pave the way to a one-year New START extension: How to verify that the other side is adhering to the freeze.

The treaty can be extended for up to five years beyond its Feb. 5, 2021, expiration with the agreement of the U.S. and Russian presidents.

Russian Foreign Minister Sergei Lavrov said on Oct. 16 at a Russian security conference that the country’s foreign ministry submitted a proposal to the United States presenting its “comprehensive approach to strategic stability.”

The U.S. proposal that was sent in response contained “preconditions for the extension of the New START,” that “have been formulated both outside the Treaty itself and outside our frame of reference,” Lavrov said at the conference, which also was attended by Russian President Vladimir Putin.

Putin proposed at that conference to “extend the Treaty now in effect unconditionally for at least a year in order to have a chance to hold substantive talks on all the parameters of problems that are regulated by treaties of this kind.”

“It is clear that we have new weapons systems that the American side lacks, at least for the time being. But we are not refusing to discuss this aspect of the matter as well,” Putin said.

Putin endorsed in June changes to Russia’s nuclear deterrent policy, which allows the country to use atomic weapons, not only in response to a nuclear attack but also to respond to conventional strikes targeting the nation’s critical government and military infrastructure.

Challenges Ahead of US-Russia Negotiations

The New START treaty constrains more than 90 percent of the U.S. nuclear deterrent, less than half of Russia’s, and none of China’s, Marshall Billingslea, the U.S.’s special presidential envoy for arms control, said on Oct. 14 at an event held by the Washington-based Heritage Foundation.

The New START treaty was negotiated a decade ago, when the situation in the world was very different, Billingslea said. Since then, Russia has invaded Crimea and destabilized Ukraine, and China has built up its nuclear arsenal, he added.

To address the national security consideration and maintain the strategic balance in the world the new treaty must be multilateral and must include China, Billingslea said. The United States also has called for China to be included in a broader treaty that would replace New START, but the regime in Beijing has rejected that proposal.

The United States has indicated to Russians that it is “willing to extend the new START treaty for some period of time provided that they, in return, agree to a limitation, a freeze on their nuclear arsenal, we’re willing to do the same,” Billingslea said.

Billingslea emphasized that the agreement should be verifiable. The Russians “are serial treaty violators, so we put forward a series of measures that would give some confidence in their abiding by the freeze and we’re willing to adopt reciprocal measures on our end,” he said.

Also, the agreement that will be negotiated with Russia must be formatted in a way that allows it to be extended to China in the future, Billingslea said.

The New START treaty was signed in 2010 by then-U.S. President Barack Obama and Russian President Dmitry Medvedev. The pact limits each country to no more than 1,550 deployed nuclear warheads and 700 deployed missiles and bombers and envisages sweeping on-site inspections to verify compliance.

After both Moscow and Washington withdrew from the 1987 Intermediate-Range Nuclear Forces Treaty in 2019, the New START is the only remaining nuclear arms control deal between the two countries.