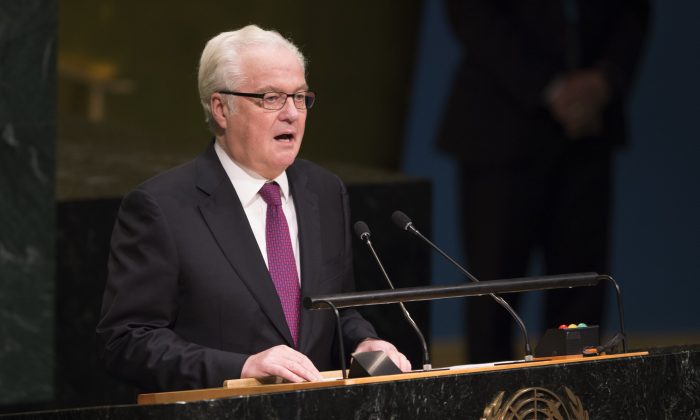 Current President of the Security Council, Vitaly Churkin, Russian Ambassador to the UN, speaks during the ceremony for the appointment of the Secretary-General during the 70th session of the General Assembly October 13, 2016 at the United Nations in New York. The UN General Assembly on Thursday formally appointed Antonio Guterres as the new secretary-general of the United Nations, replacing Ban Ki-moon. The 193 member states adopted by acclamation a resolution appointing the former prime minister of Portugal for a five-year term beginning January 1. (DON EMMERT/AFP/Getty Images)
International

UNITED NATIONS—Russia is urging the U.N. Security Council to quickly adopt a resolution endorsing the cease-fire agreement in Syria.

Russia’s U.N. Ambassador Vitaly Churkin told reporters Friday that Russia and Turkey, who brokered the nationwide cease-fire that went into effect at midnight, circulated the agreement to council members Thursday night and a brief draft resolution supporting it.

Churkin said he would formally present the draft during closed Security Council consultations on Friday morning and he hopes the council will unanimously adopt the resolution at a meeting on Saturday.

He said the Security Council needs to participate “in this important process.”

Churkin said the cease-fire agreement also commits the Syrian government and the opposition to enter into direct talks in late January in Kazakhstan’s capital Astana.