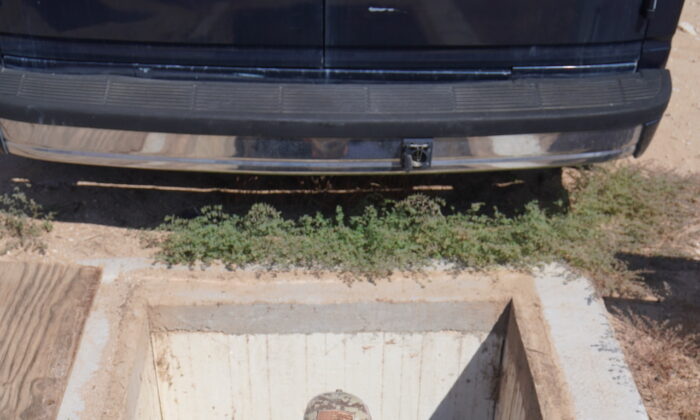 Gary Fetters, owner of ICF Construction in Arizona, shows one of the concrete underground bunkers his company builds for clients seeking safety and security in an uncertain world. (Allan Stein/Epoch Times)
Companies

Russia’s war against Ukraine and Vladimir Putin’s talks about nuclear weapons have been causing concern among some people who are buying up underground bunkers as a last-option safe haven in the event of a global war.

According to Gary Lynch, the general manager of Texas-based Rising S Company, demand for his company’s survival shelters surged by over 1,000 percent since the day of the Russian invasion. Business has increased “astronomically” over the past few days, Lynch said in an interview with The Sun on March 1.

“Typically, I’ll sell between two and six shelters a month—and usually winter is a quiet time for us. But I sold five units alone on Thursday, and I’ve sold two more already today—there’s no telling how many more [orders] we will get. The phone hasn’t stopped ringing and we’ve been sending out so many quotes,” Lynch said.

Lynch has received inquiries not only from the United States but from other countries like Denmark, Canada, Japan, Italy, and the United Kingdom. Most of his customers believe that the Russian incursion will spill over to adjoining territories and end up involving more countries culminating in a “fully-fledged world war.”

Rising S has never seen such interest as now since the two decades it’s been in business, Lynch stated. The cost of the company’s bunkers start at $40,000 and can reach multi-million figures. The five units Lynch’s company sold on the day of the Russian invasion were priced between $70,000 and $240,000.

In the UK, inquiries at Subterranean Spaces surged by 100 percent in the last weekend of February when compared to the same time last year. The company received 12 inquiries in total during the first two days of Russia’s Ukraine invasion. Its shelters cost a minimum of £100,000 ($131,396), with multi-purpose bunkers costing up to £900,000 ($1.18 million).

A typical shelter can take around four months to build, according to founder Charles Hardman. And it is important that the shelter be constructed under a garden rather than a house. “What’s the point of surviving a nuclear blast if the house collapses on top of the bunker and you can’t get out?” he said to Daily Mail.

Ron Hubbard, CEO of Atlas Survival Shelters from Texas, has been receiving a lot more calls than usual and says he’s never seen such interest. “It’s mostly phone calls,” Hubbard said. “It all starts with a phone call. They say, ‘What do you have in stock? What can we get really quick?’ There’s always a panic buy when things like this happen,” Hubbard said to Business Insider.

U.S. Buildings Group based in North Carolina is also seeing a spike in demand for bunkers. The company had 97 discussions with prospective clients last month, which is a 130 percent increase from February 2021. Half of the discussions took place after Russia attacked Ukraine.