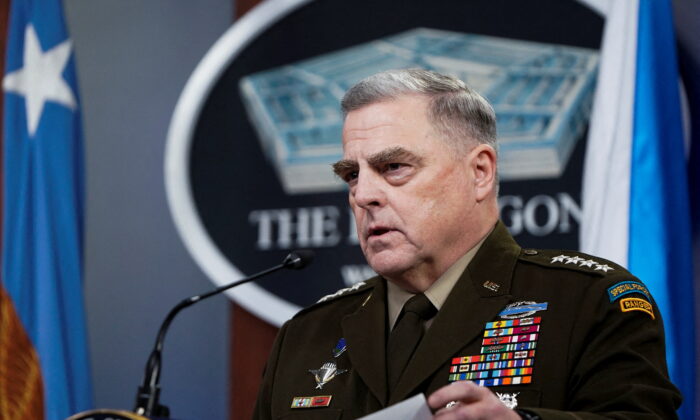 General Mark Milley, chairman of the U.S. Joint Chiefs of Staff, answers questions from reporters about Russia and the crisis in the Ukraine during a news conference at the Pentagon in Washington on Jan. 28, 2022. (Joshua Roberts/Reuters)
US News

Russia-Ukraine War ‘Not Inevitable’ but If It Happens, Death Toll Would Be High: US Military Officials

A Russian invasion of Ukraine is not inevitable but if it does take place, it would lead to a significant number of deaths, top U.S. military officials said Friday.

“Conflict is not inevitable,” U.S. Defense Secretary Lloyd Austin told reporters at the Pentagon in Washington. “There is still time and place for diplomacy.”

Russia has amassed upwards of 100,000 troops on its border with Ukraine, which was part of the Soviet Union until it gained its independence in 1991. It’s also maneuvered artillery, ballistic missiles, and other weapons into the region.

Ukraine has about 150,000 active-duty troops, with others in the reserves.

Austin and Gen. Mark Milley, the chairman of the U.S. Joint Chiefs of Staff, said Russia should work with the United States and other North Atlantic Treaty Organization (NATO) members to reach an agreement instead of going to war. But if an invasion does happen, the terrain and conditions in Ukraine means the fighting would “result in a significant amount of casualties,” Milley said.

Fighting could break out quickly in cities like Kyiv, population 3 million, because moving troops across Ukraine is easier this time of year due to frigid weather freezing bodies of water.

“You can imagine what that might look like in dense urban areas, all along roads, and so on. It would be horrific,” Milley added.

Russia has so far held back from invading its neighbor and one top official said Friday that “we don’t want war,” but a Russia-NATO agreement hasn’t been reached and Russia has not withdrawn any troops from the region.

Putin said Jan. 27 that he would analyze a written response from the United States that came after Russia demanded Ukraine not be allowed to join NATO or host U.S. military bases.

Ukrainian officials have condemned certain U.S. actions, including the removal of diplomats and the urging of U.S. citizens to leave the region.

“In my opinion, this is a mistake. Because those are signals of how the world reacts,” Ukrainian President Volodymyr Zelensky told reporters in a briefing in Kyiv. “Journalists, if they want to understand the situation, let them come to Kyiv. Are tanks driving here on our streets? No. But it feels like this [reading the news],” he also said.

NATO’s top official, Jens Stoltenberg, told a briefing in Belgium around the same time that the alliance’s members are prepared to up their military presence in the bloc’s eastern portion.

“From the NATO side, we are ready to engage in political dialogue. But we’re also ready to respond if Russia chooses an armed conflict, confrontation. So we are ready for both options. We are working hard for the best peaceful, political solution but we’re also prepared for the worst,” he said.

The United States and its allies have been sending security assistance to Ukraine, including grenade launchers and guns, but U.S. President Joe Biden has promised not to send troops to fight in the country.

However, the United States stands ready to fulfill its obligations under NATO rules, which stipulate that an attack on one NATO country is an attack on all of them, and has placed 8,500 troops on heightened alert.

Those troops may be deployed to NATO members that border Ukraine, including Poland, Hungary, and Romania, U.S. officials said.

“We haven’t actually moved any troops. We put troops on higher alerts. Even if and when we do move troops, the purpose of those troops deploying would be to reassure allies or directly in support of NATO, or both,” Austin said.

“We certainly have no intent whatsoever that I’m aware of in putting offensive forces to attack Russia, and I don’t think that’s NATO’s intent at all,” Milley added. “This is entirely engineered by Russia and President Putin as an overt act of coercion against Ukraine.”