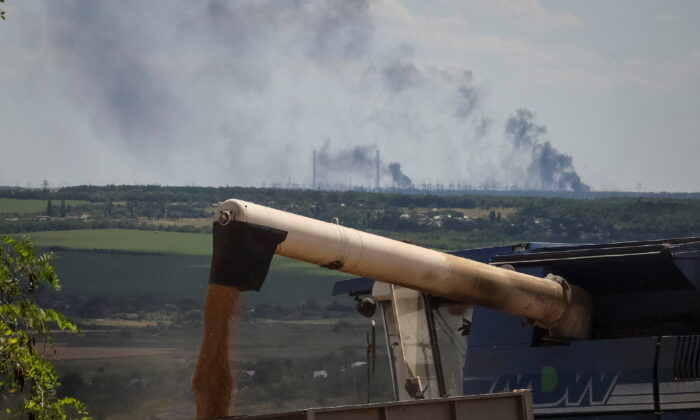 Farmers harvest wheat as Vuhlehirsk's heat power plant burns in the distance after a shelling, amid Russia's attack on Ukraine, in the Donbas region, Ukraine July 13, 2022. REUTERS/Gleb Garanich
World

Officials from Russia, Ukraine, Turkey, and the United Nations have agreed to a deal to resume exports of Ukrainian grain through the Black Sea, according to Turkish and U.N. officials.

A general agreement that was reached during talks in Istanbul last week will be put into writing, and signed by all parties on July 22 at the Dolmabahce Palace offices in Istanbul, Turkish President Recep Tayyip Erdogan’s office said in a July 21 statement.

There was no immediate confirmation of the deal from Moscow or Kyiv.

“The grain export agreement, critically important for global food security, will be signed in Istanbul tomorrow under the auspices of President Erdogan and U.N. Secretary-General Mr. [António] Guterres together with Ukrainian and Russian delegations,” Erdogan spokesman Ibrahim Kalin said in a tweet.

While details of the agreement weren’t made immediately clear, before the most recent round of talks, negotiators had sought a resumption of Ukraine’s Black Sea grain exports as well as Russia’s own grain and fertilizer shipments. Additionally, Russia is believed to have requested guarantees that Turkey would inspect the ships for smuggled weapons, which the Kremlin fears could be used to bulk up Ukrainian forces.

Ukrainian vessels will need to guide grain ships in and out of ports, which have been heavily mined throughout the course of the war.

Russia was the world’s largest wheat exporter last year; Ukraine was the fifth largest. The two nations accounted for $12 billion in wheat exports in 2021, or roughly 21.6 percent of the global total.

Since the start in February of Russia’s invasion and subsequent war with Ukraine—which Russian leadership terms a special military operation—that proverbial breadbasket has been cut from the rest of the world, sparking food shortages and sharply higher prices.

Currently, dozens of grain ships are stranded throughout the region; an estimated 20 million tons of grain are currently stuck in the port of Odessa in southwestern Ukraine.

Farhan Haq, the deputy spokesman for the U.N. secretary-general’s office, said he hopes the deal would help to prevent catastrophe for those suffering from food shortages.

“We’ve been working around the clock with intense behind-the-scenes talks with countless moving parts,” Haq said, according to ABC.

“We can potentially save hundreds of thousands, potentially millions of people, from having food be priced out of their reach.”