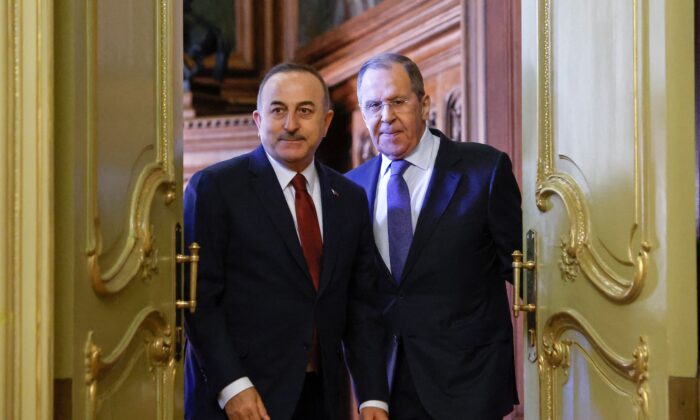 Russia, Ukraine Nearing Agreement on ‘Critical’ Issues That Could Lead to Ceasefire: Turkey

Turkish officials on March 19 said that talks between Russia and Ukraine are nearing agreement on “critical” issues that could lead to a ceasefire, so long as the two sides do not backtrack on the progress they have achieved so far.

Those talks did not produce any concrete results.

Cavusoglu also traveled to Russia and Ukraine last week for talks with Lavrov and Kuleba.

He told Turkish daily Hurriyet in an interview published on Sunday that there had been “rapprochement in the positions of both sides on important subjects, critical subjects.”

“We can say we are hopeful for a ceasefire if the sides do not take a step back from the current positions,” he said. “There are open channels between the leaders. This is now known.”

Cavusoglu said that both Russia and Ukraine “almost agree” on four key issues in the negotiations. These include Ukraine’s neutrality and agreement not to pursue membership in NATO and the process that the Russian side calls “de-Nazification,” according to Hurriyet.

Both Western and Ukrainian officials have dismissed Russia’s claims that “neo-Nazis” are behind Kyiv’s government.

Cavusoglu did not elaborate further on the issues, noting that Turkey acts as a “mediator” between Russia and Ukraine and wants to play a “facilitating role.”

“Therefore, it would not be appropriate for me to make an assessment that one side wants more,” Cavusoglu said. “Ultimately, what matters is that they come together. It happens in Turkey, it happens elsewhere. It is important for us that the two parties come together.”

NATO member Turkey, which shares a maritime border with Ukraine and Russia in the Black Sea, has continued its diplomatic efforts to deescalate the conflict in Ukraine and called on both sides to come to an agreement regarding a ceasefire.

While the country has voiced support for Ukraine’s territorial integrity and sovereignty and continues to send humanitarian aid to Kyiv, it has also opposed the multiple Western sanctions imposed on Moscow over the invasion.

Turkish presidential spokesman Ibrahim Kalin, speaking to Al Jazeera television, said the two sides were getting closer to agreeing on four key issues including Russia’s demand for Ukraine not to pursue NATO membership, demilitarization, and so-called “de-Nazification,” as well as the protection of the Russian language in Ukraine.

Ukraine and Russia appeared to have made some progress in ceasefire talks last week toward a political resolution, according to reports.

However, top Kremlin spokesman Dmitry Peskov later told the Financial Times that assertion was incorrect and that the Kyiv government is “in no rush” and dragging its feet.

“On the whole,” reports about the progress being made “[are] wrong,” Peskov said. “No, the work continues [on the talks],” he continued, adding that Moscow will inform the public if any breakthroughs are reached in the negotiations.

Turkish presidential spokesman Kalin said he was hopeful that a permanent ceasefire could happen only if Russian President Vladimir Putin and Ukrainian President Volodymyr Zelensky were to meet in person and also discuss the political-legal status of Donbas and Crimea.

“We’re hoping that there will be more convergence on these issues and this meeting will take place sooner rather than later because we all want this war to come to an end,” he said.

Zelensky on Saturday said he’s ready to negotiate with Putin but warned that if such talks were to fail, “that would mean that this is a Third World War.”

“If there’s just a 1 percent chance for us to stop this war, I think that we need to take this chance. We need to do that. I can tell you about the result of [these] negotiations—in any case, we are losing people on a daily basis, innocent people on the ground,” Zelensky continued, adding, “I think we have to use any format, any chance in order to have a possibility of negotiating, possibility of talking to Putin.”