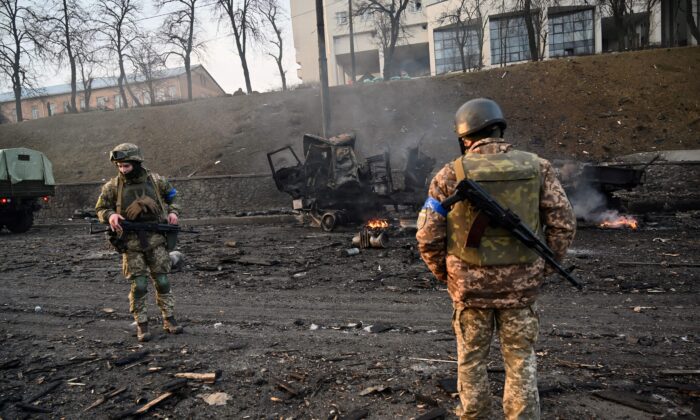 The latest on the Russia–Ukraine crisis, March 11. Click here for updates from March 11.

Around 1,300 Ukrainian troops have been killed since the start of the Russian invasion, President Volodymyr Zelensky said on Saturday.

“People are being killed. We are not happy that we have lost some 1,300 soldiers and Russia has lost about 12,000,” Zelensky said at a press briefing.

He said the West should be more involved in fighting Russia to prevent Russia from invading other countries.

“What is happening in Ukraine today will happen in Europe tomorrow. In order to prevent it everyone should fight, for themselves, fight here, in whatever way they can,” he said.

Fighting raged northwest of Kyiv on Saturday, with the bulk of Russian ground forces around 16 miles from the center of the Ukrainian capital, according to British intelligence, while sources told The Epoch Times that Ukrainian forces were battling groups of Russian saboteurs in several Kyiv suburbs.

Elements of a large Russian column north of Kyiv had dispersed, likely to regroup for a fresh offensive against Kyiv and possibly to reduce its vulnerability to Ukranian counter attacks, Britain’s Ministry of Defense said in a situational update on Saturday.

Zelensky Says He Is Ready for Negotiation With Russia

Zelensky told foreign reporters at a briefing in Kyiv that holding lower-level technical negotiations in Belarus, Russia, or Ukraine would be “unconstructive,” calling instead for a “meeting of leaders,” potentially in Jerusalem.

He took a positive view of Bennett serving as a mediator between the warring sides and called for Israel to be among the security guarantors for Ukraine.

“We are generally positive,” Zelensky said of Bennett’s role as peace broker. “I am personally positive about anyone’s mediation … But I don’t call Bennett ‘anyone’ because I think he can play an important role,” adding that, “it is very good to have such mediation.”

President Joe Biden is authorizing the State Department to provide additional aid to Ukraine of up to $200 million.

The funds would cover weapons as well as military services, education, and training.

The aid is part of broader U.S. support in the form of aid and sanctions. When Russia invaded Ukraine in late February, Secretary of State Antony Blinken noted that $1 billion in aid had been provided to Ukraine.

The ongoing warfare has led to additional support, with Congress this week approving $13.6 billion in additional aid, a sum that includes $6.5 billion for the costs of sending troops and weapons to Eastern Europe and $6.8 billion for refugees and economic aid.

Biden plans to sign the spending bill with the additional aid when he receives it next week.

French officials said the Russian leader gave no indication during the call Saturday lasting more than an hour that he intends to stop the fighting in Ukraine.

European leaders are working on what they describe as a punishing new set of “massive” economic sanctions against Moscow in the hope of getting Putin to change his mind.

Ukraine’s military says Russian forces have captured the eastern outskirts of the besieged city of Mariupol.

In a Facebook update Saturday, the military said the capture of Mariupol and Severodonetsk in the east were a priority for Russian forces. Mariupol has been under siege for over a week.

German Chancellor Olaf Scholz and French President Emmanuel Macron have spoken with Russian President Vladimir Putin urging him to agree to an “immediate cease-fire in Ukraine.”

Scholz’s office said the 75-minute call Saturday was part of “ongoing international efforts to end the war in Ukraine.”

It said the leaders of Germany and France called on Putin to begin the process of finding a diplomatic solution to the conflict.

Further details of the call were not released.

Separately, Scholz spoke earlier Saturday with President Volodymyr Zelensky to get his assessment of the current situation.

Russia Warns US Over Shipments of Military Equipment to Ukraine

A senior Russian diplomat is warning that Moscow could target Western shipments of military equipment to Ukraine.

Speaking Saturday, Deputy Foreign Minister Sergei Ryabkov said that Moscow has warned the United States it would see the deliveries of Western weapons to Ukraine as targets.

Ryabkov said Russia “warned the U.S. that pumping weapons from a number of countries it orchestrates isn’t just a dangerous move, it’s an action that makes those convoys legitimate targets.”

He also denounced the U.S. sanctions against Moscow as an “unprecedented attempt to deal a serious blow to various sectors of the Russian economy,” but noted that Moscow will act in a measured way to avoid hurting itself.

Ryabkov said that Russia has no intention to expel Western media and businesses amid the soaring tensions with the West, adding that ”we aren’t going to escalate the situation.”

US Soldiers Continue to Deploy to Europe

The soldiers are in addition to the estimated 3,800 soldiers from the Army’s 3rd Infantry Division who deployed recently from nearby Fort Stewart.

A division commander said that soldiers are being told to prepare for about six months overseas. The Pentagon has ordered roughly 12,000 total service members from various U.S. bases to Europe.

The soldiers’ mission is to train alongside military units of NATO allies in a display of force aimed at deterring further aggression by Russia. The Pentagon has stressed U.S. forces are not being deployed to fight in Ukraine.

Fighting raged northwest of Kyiv on Saturday, with the bulk of Russian ground forces 25 km (16 miles) from the center of the Ukrainian capital, while several other cities were encircled and under heavy shelling, the UK Defence Ministry said.

Ukraine’s Deputy Prime Minister Iryna Vereshchuk said she hoped that several humanitarian corridors would open on Saturday for thousands of residents in the bombarded cities, including from the besieged port city of Mariupol to Zaporizhzhia.

Russian forces appeared to be regrouping, possibly for a fresh offensive that could target the capital Kyiv in a few days, Britain’s defense ministry said on Friday. In a Saturday update, it said fighting northwest of the capital continued and the cities of Kharkiv, Chernihiv, Sumy, and Mariupol remained encircled under heavy Russian shelling.

Italian financial police has seized a Russian-owned superyacht valued at 530 million euros ($578 million) in the port of Trieste as part of seizures of oligarch wealth to pressure Russian President Vladimir Putin to halt the war on Ukraine.

The “Sy A” yacht was identified by Italian police as belonging to belonging to billionaire Andrey Igorevich Melnichenko. It was seized Friday evening.

Video shows police in cars with flashing lights approaching the triple-mast yacht and officers boarding it.

Italian authorities last week seized some 143 million euros ($156 million) in luxury yachts and villas belonging to Russian billionaires in such picturesque retreats as Sardinia, the Ligurian coast, and Lake Como.

The International Maritime Organization, a U.N. oversight body for international seafaring and the law of the sea, is calling for a safe corridor in the Black and Azov seas to let commercial ships evacuate.

Many of the waters are mined, and Russian navy vessels are off the shores of Ukraine. Explosions have hit at least two cargo ships in the area and dozens of others have been stranded.

Meta on March 10 announced a temporary change in its content policy that would allow users to express their views against Russia’s attack on Ukraine, allowing posts such as “death to Russian invaders.”

The Meta statement reads: “As a result of the Russian invasion of Ukraine, we have temporarily made allowances for forms of political expression that would normally violate our rules like violent speech such as ‘death to Russian invaders.’ We still won’t allow credible calls for violence against Russian civilians.”