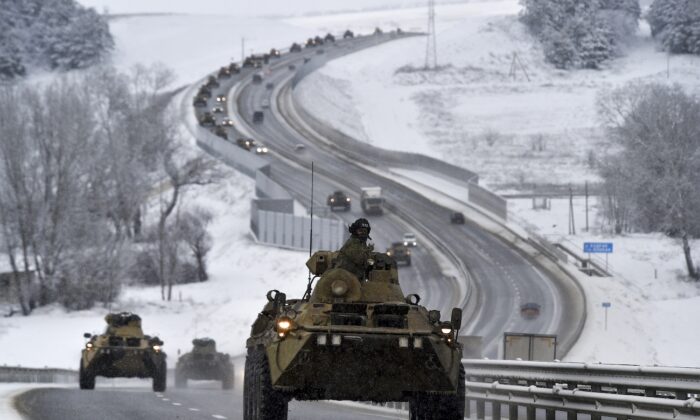 A convoy of Russian armored vehicles moves along a highway in Crimea on Jan. 18, 2022. (AP Photo)
Inflation

A top International Monetary Fund (IMF) official has said that escalation of a conflict between Russia and Ukraine could fuel higher energy and commodity prices and make the current inflationary bout last even longer.

IMF First Deputy Managing Director Gita Gopinath made the remarks to reporters at a Jan. 25 press briefing on the occasion of the release of the agency’s most recent World Economic Outlook. The report projects that inflation will last longer than the IMF previously expected, even without any additional impact from the simmering Russia–Ukraine conflict.

Asked how the IMF would factor any escalation-related disruptions into its inflationary forecasts, Gopinath said a likely effect of a potential conflict would be a rise in the price of oil and natural gas, causing energy costs to uptick more broadly.

“In terms of headline inflation numbers, this certainly could keep headline inflation much more elevated for longer,” Gopinath said. “Of course, we are hoping, like all of the international community is, that there can be a peaceful resolution to this issue.”

Western leaders have grown increasingly anxious over a Russian troop buildup near its border with Ukraine, fearing that Moscow may be planning an invasion. While the Kremlin has denied any such plans, Russia’s history of regional belligerence, including invasions of Georgia in 2008 and Crimea in 2014, has left Western powers deeply skeptical of its assurances.

Meanwhile, inflation has surged in countries across the world, with economists blaming a range of factors, including pandemic-related supply chain and labor force dislocations. Historically unprecedented levels of fiscal and monetary stimulus, along with savings accumulated during the pandemic, have bolstered demand in the face of constrained supply, driving up prices.

The inflationary surge surprised many policymakers, who have increasingly abandoned the “transitory” narrative that pervaded early official statements from central banks. Those banks are now in the midst of a hawkish pivot in a bid to tame runaway prices.

The global economy entered 2022 in a weaker position than previously expected due to the Omicron coronavirus variant surge, the IMF stated in its World Economic Outlook, warning that it now expects elevated inflation to persist for longer, “with ongoing supply chain disruptions and high energy prices continuing into 2022.”

And while the risks to the global economy are tilted to the downside, according to the IMF, there’s a high level of uncertainty around the future path of inflation in the face of supply chain disruptions, high energy prices, and upward pressure on wages.