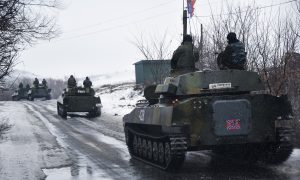 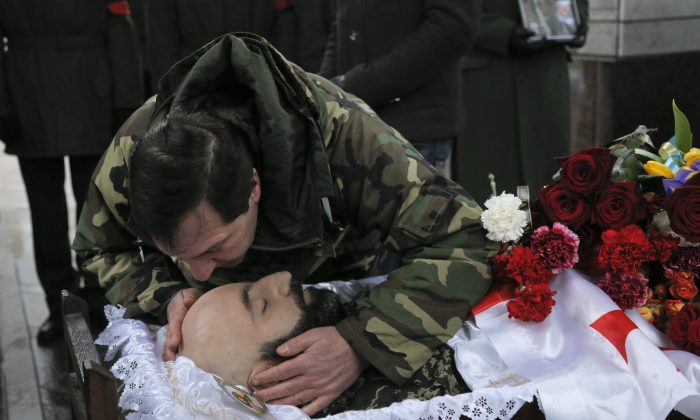 A man pays his final respect to the body of serviceman Thomas Sukhiashvili, a Georgian national who was killed in fighting against Russia-backed separatists, during a commemoration ceremony in Kiev, Ukraine, on Wednesday, Jan. 21, 2015. Sukhiashvil was a veteran of NATO-led campaigns in Afghanistan and Iraq and Georgia’s 2008 war with Russia. A former senior Georgian military official says around 100 Georgian volunteers are fighting alongside Ukrainian forces in the conflict against Russian-backed separatists. (AP Photo/Efrem Lukatsky)
Crisis in Ukraine

BERLIN—Diplomats from Russia and Ukraine agreed Wednesday on a dividing line from where both sides should pull back their heavy weapons, just hours after separatist forces deployed more arms and manpower to an emerging flashpoint in eastern Ukraine.

Germany’s Foreign Minister, who hosted a meeting of his counterparts from Russia, Ukraine and France, said the four parties had agreed that the demarcation line defined in the Minsk agreement of last year should form the basis for the withdrawal. Under the plan, Ukraine and the pro-Russian separatists would pull back their heavy arms 15 kilometers (9 miles) on either side of the line, though there was no agreement on a withdrawal of all troops.

“Today we have finally agreed that the demarcation line mentioned in the Minsk agreement is the line from where the withdrawal of heavy weapons needs to take place now,” German Foreign Minister Frank-Walter Steinmeier told reporters after the meeting in Berlin.

Steinmeier said the agreement had been “difficult work” and the talks, which follow a fruitless round of negotiations last week, were “testing the patience of all involved.” The parties also agreed that the contact group of Ukraine, Russia, and the OSCE should meet as soon as possible with the aim of laying further groundwork for a high-level meeting in Kazakhstan’s capital Astana aimed at reaching a long-lasting settlement.

Separately, Russian Foreign Minister Sergey Lavrov said the “strong support” for the pullback was the meeting’s most important result. He said the foreign ministers did not discuss the sanctions that the West has imposed on Russia over the Ukraine crisis, saying: “The sanctions are not our problem, it is the problem of those who introduced them and now do not know how to extricate themselves …”

Earlier Wednesday, Lavrov had urged measures to contain the unfolding unrest, but said nothing about the rebels surrendering territory they acquired in violation of a peace deal concluded in September in Minsk, Belarus. Ukraine says separatist forces that are backed by Russia have overstepped agreed-upon front-line boundaries between the warring sides by 500 square kilometers (190 square miles).

A fresh separatist advance is under way in an area northwest of Luhansk, the second-largest rebel-held city. The fighting is centered on two checkpoints along a strategic highway.

Ukraine’s Defense Ministry said one of those positions, Checkpoint 31, had been abandoned but that operations were underway to retake it.

The separatist forces appear well-poised to take the upper hand, however.

An Associated Press reporter saw nine Gvozdika self-propelled howitzers and six anti-tank cannons moving near the town of Perevalsk around midday. A rebel militiaman with the convoy who declined to give his name said the armament was heading in the direction of Checkpoint 31.

Ukraine and the West accuse Russia of providing material support to the separatists, which Moscow denies. The sheer amount of sophisticated heavy weaponry in the hands of the insurgents, however, is widely seen as overwhelming evidence of direct involvement by Russia.

Speaking during a visit to Kiev, U.S. Army Europe commander Lt. Gen. Ben Hodges said the quantity of Russian equipment being provided to separatists had doubled between the September cease-fire deal and December.

“It is very clear from the capabilities that the proxies (rebels) have used against Ukrainian security forces, the type of artillery, modern equipment, the amount of ammunition that has been used,” Hodges said. “It is irrefutable that they are getting direct support from Russia.”

Addressing the World Economic Forum in Davos, Switzerland, Ukrainian President Petro Poroshenko held up a piece of a bullet-riddled bus as evidence of shelling last week by Russian heavy artillery in his country. He says 9,000 Russian troops are occupying 7 percent of Ukrainian territory.

He said the metal came from a bus in the town of Volnovakha, where 13 people were killed by what he described as Russian shelling.

“For me this is a symbol, a symbol of the terroristic attack against my country,” he said, comparing it to the downing of Malaysia Airlines Flight 17 over rebel-held eastern Ukraine last summer. He called it a “global problem,” extending far beyond just Ukraine’s borders, cutting short his visit to Davos to deal with the crisis in his country.

The fighting in the Luhansk region follows intense clashes over the weekend for control of the airport on the fringes of the main rebel city, Donetsk. The terminal — once the pride of the city but now reduced to a burned-out shell — is of limited strategic value. Now, however, it has acquired symbolic value because of the Ukrainian forces’ stand against waves of separatist attacks.

The fierce airport battle shattered the relative tranquility that had been in place since a new truce was reached in early December.

Shelling in and around Donetsk has abated since the weekend, although artillery strikes have continued to claim civilian casualties. A shell that fell in Donetsk’s Kirov district Wednesday left two dead.

U.S. State Department spokeswoman Jen Psaki said there has been an increase in separatist violence, including rocket attacks on the Donetsk airport in recent days, and separatist seizures of more territory.

“We’ve also seen reports that Russia has moved two tactical battalions into Ukraine,” she said in Washington. “We can confirm that Russia continues to move tanks, armored vehicles, trucks artillery pieces and other military equipment to deployment sites near the Russia-Ukraine border, which serve as staging points before transporting military equipment to pro-Russia separatists. That is something we’re seeing.”

Secretary of State John Kerry said the U.S. was concerned that the separatists were attacking the town of Debaltseve, about 70 kilometers (45 miles) east of Donetsk.

“This is a very blatant land grab and it is in direct contravention to the Minsk Agreement that they signed up to,” Kerry said.

Lavrov said the continuing truce violations were rooted in the failure to abide by the line of contact between the two sides. He said Russian President Vladimir Putin had written to Poroshenko with a proposal to use the original boundary for the withdrawal of heavy weapons.

Under the September agreement, Ukrainian and separatist forces agreed to pull back their artillery by 30 kilometers (19 miles).

Poroshenko said a political dialogue must follow to help stabilize the situation and called for holding local elections in eastern Ukraine. Lavrov said Russia would welcome municipal elections there.

Ukraine is trying to cope with a resource-draining conflict while simultaneously fending off the prospect of total economic collapse.

“We will consult with the IMF executive board on the (Ukrainian) authorities’ request,” Lagarde said.

From The Associated Press. Peter Leonard in Kiev, Ukraine; John Heilprin in Davos, Switzerland; Jim Heintz in Moscow and Matthew Lee in Washington contributed to this report.