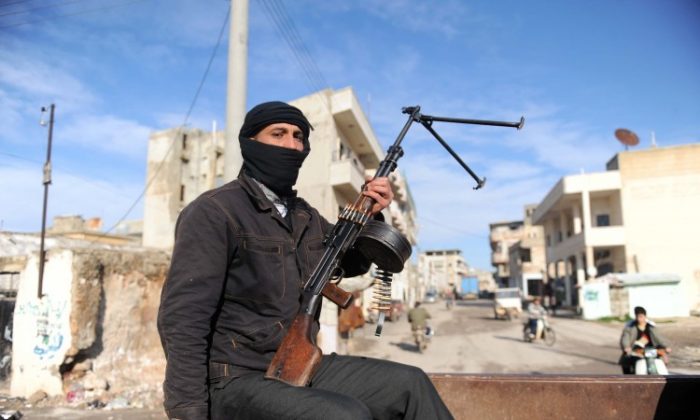 A member of the Free Syrian Army sits in the back of a pick-up truck during a patrol in Idlib in northwestern Syria on February 18, 2012. Russia on Tuesday said it would not take part in the Friends of Syria talks to resolve the crisis in the country. (Bulent Kilic/AFP/Getty Images)
World

Russia to Not Attend Meeting on Syria

Russia said it would not attend the Friends of Syria international meeting that seeks to discuss the ongoing violence in Syria, media reports said.

Foreign Ministry spokesperson Alexander Lukashevich said it would decline to attend the Western-backed meeting because members of the Syrian government would not be there, and because it “leaves more questions than clear answers,” according to state-run RT.

The Friends of Syria group brings together several European and Arab countries to deal with the conflict after a United Nations Security Council resolution was vetoed by China and Russia several weeks ago.

China declined to comment on whether it would send a delegation to the talks, reported Radio Free Europe.

Activists said Tuesday’s death toll was at least 50 people killed across the country, including 30 in the besieged city of Homs, which has been under near constant bombardment by the Syrian army.

The United Nations estimates that at least 5,400 people have been killed in Syria during the past year while President Bashar Assad’s hard-line regime attempts to stamp out a revolt that began after peaceful protests in March 2011.