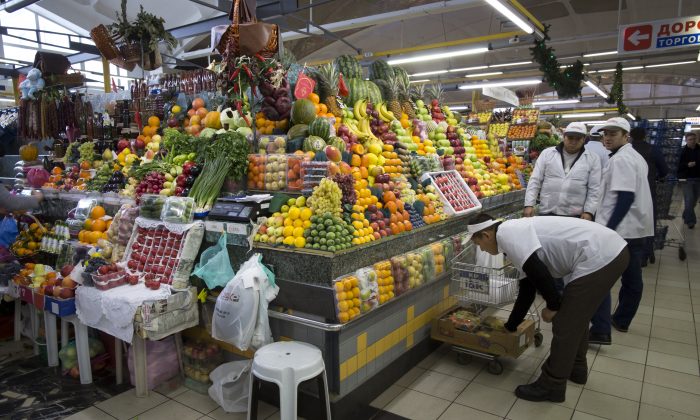 Russia to Impose Food Ban in New Sanctions Against Turkey

MOSCOW—Russia will restrict imports of Turkish fruit and vegetables as part of a package of new sanctions following the downing of a Russian warplane by Turkey last week.

Russia has previously banned food imports from the European Union and United States over the Ukraine crisis, a measure which has been blamed for fueling price rises of food on the Russian market.

The new measures against Turkey announced at a meeting chaired by Prime Minister Dmitry Medvedev also include a government veto on Turkish construction firms working in Russia and restrictions on road transport.

The measures come two days after Russian President Vladimir Putin issued a decree ordering sanctions against Turkey and calling for imports to be restricted, although he did not specify which goods were to be banned.

RIA reported that Medvedev called for sanctions to be “most effective for the Turkish side but minimally affecting our economic interests.”

The new measures come on top of some already published in Putin’s decree Saturday, such as an end to visa-free travel for Turks in Russia and to extensions of labor contract for Turks working in Russia as of Jan. 1.

The decree also called for ending chartered flights from Russia to Turkey and for Russian tourism companies to stop selling vacation packages that would include a stay in Turkey.

Also Monday, Turkish Prime Minister Ahmet Davutoglu said his country would not apologize to Russia for shooting down the warplane and said he hoped that Russia would reconsider sanctions.

Turkey has said it was defending its national airspace, while the Russian government denies its plane entered Turkey.