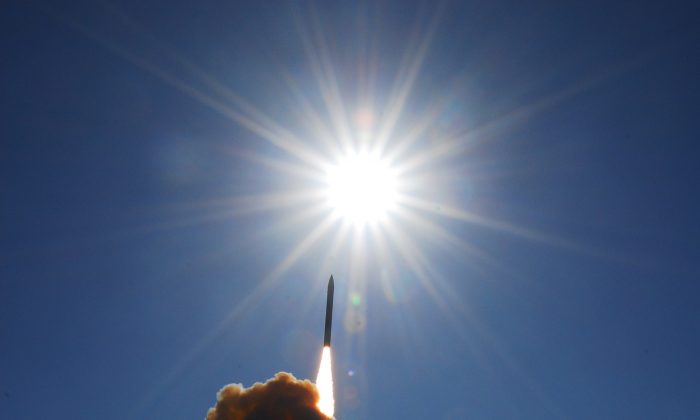 This image provided by the U.S. Air Force shows a Missile Defense Agency interceptor missile being successfully launched, Friday Dec. 5, 2008 from Vandenberg Air Force Base, Calif. The launch was part of an exercise and flight test involving the intercept of an intercontinental ballistic missile by a ground-based interceptor missile designed to protect the United States against a limited long-range ballistic missile attack. (AP Photo/U.S Air Force Photo/Joe Davila)
Europe

Russia to Get 40 New Intercontinental Missiles This Year

MOSCOW— President Vladimir Putin says the Russian military will receive 40 new intercontinental ballistic missiles this year capable of piercing any missile defenses — a blunt reminder of the nation’s nuclear might amid tensions with the West over Ukraine.

Putin made the statement Tuesday at the opening of an arms show at a shooting range in Alabino just west of Moscow, a display featuring the latest Russian weapons.

He says the military is also getting an array of other new weapons, including the Armata tanks and other new armored vehicles, which were first shown to the public during a Red Square military parade last month.

Putin also noted that the military was to start testing its new long-range early warning radar intended to monitor the western direction.