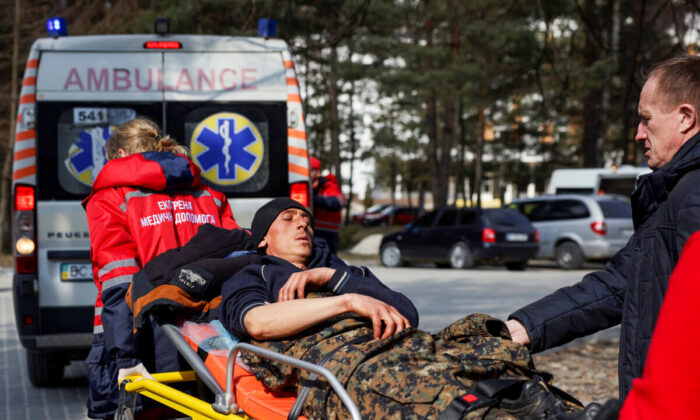 A man wounded in air strikes at a nearby military complex is assisted by medical staff outside Novoiavorivsk District Hospital in Novoiavorivsk, Ukraine, on March 13, 2022. (Dan Kitwood/Getty Images)
Economic Policies

Russian airstrikes on the Yavoriv military training area in Ukraine have left at least 35 people dead, according to the Lviv regional administration in a statement on Sunday.

About 30 missiles were fired from warplanes over the Black and Azov and hit the military base, said Lviv regional military administration chief Maksym Kozytsky in a Facebook statement. Another 134 people were hospitalized in the incident, his office said.

The Yavoriv military site is about 12 miles away from the Polish border and is some 25 miles from Lviv, located in western Ukraine.

“Russia has attacked the International Center for Peacekeeping & Security near Lviv. Foreign instructors work here. Information about the victims is being clarified,” Ukrainian Defence Minister Oleksii Reznikov said on social media. “This is new terrorist attack on peace & security near the EU-NATO border. Action must be taken to stop this.”

Since the start of the invasion on Feb. 24, Russian forces have targeted western Ukraine with fewer strikes than in other parts of the country. However, starting late last week, Moscow appeared to have escalated strikes in the western portion of the country

Airstrikes hit the Lutsk airfield that left two Ukrainian servicemen dead and six people wounded, the head of the Volyn region, Yuriy Pohulyayko, told media outlets in a statement. The strikes also targeted an airport near Ivano-Frankiivsk, where residents were ordered to shelter after an air raid alert, Mayor Ruslan Martsinkiv said on social media.

But on Sunday, a UK minister, Michael Gove, said that the strikes near the Polish border marked a “significant escalation” in the conflict. Poland is a NATO country, and top officials in the alliance have said they will defend their territories if Russia attacks.

Ukraine said foreign military instructors have previously worked at the Yavoriv International Center for Peacekeeping and Security, which was hit, but a NATO official told Reuters that there were no personnel from the alliance there. It was not immediately clear whether any non-NATO states might have representatives there.

On Saturday, Moscow warned that it would take action against NATO countries’ continued supply of arms to Ukraine.

“We warned the United States that the orchestrated pumping of weapons from a number of countries is not just a dangerous move, it is a move that turns these convoys into legitimate targets,” Russian Deputy Foreign Minister Sergei Ryabkov told Russian state-run media on Saturday, describing the weapons corridors as a “thoughtless transfer” that would soon bring consequences.

But Aleksey Danilov, the secretary of Ukraine’s National Security and Defense Council, alleged that NATO would defend the weapons corridors, according to state TV.

In eastern Ukraine, Russian troops are trying to surround Ukrainian forces as they advance from the port of Mariupol in the south and the city of Kharkiv in the north, the UK Defence Ministry said on Sunday.

British intelligence also said Russian forces advancing from Crimea, which Russia annexed from Ukraine in 2014, were trying to circumvent Mykolaiv as they look to drive west towards Odesa. Air strikes on Mykolayiv killed nine people on Sunday, regional Governor Vitaliy Kim said in an online statement.

Earlier in March, the United States confirmed that it deployed Patriot surface-to-air missile batteries to Poland to “proactively” counter “any potential threat” to Poland or NATO.

“At the direction of the Secretary of Defense and at the invitation of our Polish allies, General Wolters, Commander of US European Command, has directed US Army Europe and Africa to reposition two Patriot Batteries to Poland,” U.S. European Command (EUCOM) spokesman Capt. Adam Miller said on March 9.